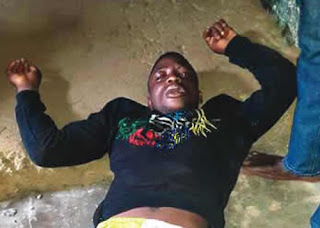 No fewer than five people, including a policeman, three others and a pupil, were reportedly killed on Tuesday when some hoodlums clashed with policemen from the Area D Command, in the Akala and Idi-Oro areas of Mushin, Lagos State.

According to PUNCH Newspaper, trouble started when a police team raided a shop on Elegba Street, where some hoodlums sold hemp.

The hoodlums attacked the policemen with broken bottles and stones in retaliation.
It was gathered that the policemen who retreated, reportedly returned with reinforcements and engaged the hoodlums in a gun battle.

While speaking to a correspondent, an eyewitness, said the police shot tear gas canisters into two private secondary schools, Ansarudeen Comprehensive College and Amazing Grace Secondary School, where some pupils were choked, and a pupil of Amazing Grace, Samuel Okechukwu, who was asthmatic, reportedly died.

The witness said, “The police had been raiding Akala and Idi-Oro for some weeks now and carrying away bags of hemp. The hoodlums believe that the police resell them. They had been planning to fight back.

“Last night (Monday), a man on Elegba Street took delivery of hemp worth N7m and the police got information about it. Around 11am, the policemen, led by the Area Commander, Area D Mushin, Akinbayo Olusoji, headed for the shop and seized the hemp.

“The residents, who had been enraged by previous raids, mobilised and launched an attack. They threw stones, broken bottles and other items at the policemen.

“The policemen returned with reinforcements. Three people were shot dead. They fired two tear gas canisters into Ansarudeen Comprehensive College on Alhaji Lasisi Street and another one entered into Amazing Grace Secondary School on Elegba Street. Many of the pupils were affected. A boy died in Amazing Grace.”

It was learnt that the victim, Okechukwu, who was in Junior Secondary School two, was confirmed dead in a hospital. Another pupil, who was running home in the confusion that followed the shootout, was reportedly hit by a vehicle. His leg was broken.

A source faulted the police for shooting tear gas into the schools. “They should have known that at that period (11am), the pupils would be on break and would be playing on their premises. The boy that died lived with his parents on Amodu Street, Idi-Oro. He was their only child,” he added.

A resident, who did not want to be identified, said a policeman was killed, and noted that many passersby were injured during the mayhem.

The resident, however, said the fight was caused by alleged police extortion. “There are black spots in Idi-Oro where the hoodlums smoke hemp freely. The police collect settlement from them. The police had gone there two weeks ago and got some settlements. They returned today (Tuesday) and the boys resisted and that was how the fight started.

“The hoodlums brought out guns and engaged the police in a shootout. It was like a war. The police had killed two of them before a cop was seized and stabbed to death. They brought out his intestines with bottles,” he said.

The state Police Public Relations Officer, SP Chike Oti, said he was aware of the incident, adding that the details were still sketchy.
Posted by Unknown
Labels: News