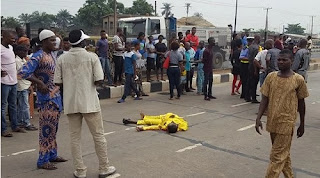 A middle aged man lost his life in an unfortunate manner yesterday after being crushed to death by a bus on the Bus Rapid Transit (BRT) lane at Irawo Bus stop, Ikorodu Road, Kosofe Local Government Area, Lagos.

It was gathered that the victim was knocked down by a BRT vehicle as he tried to cross the BRT expressway. The vehicle, with its passengers, sped off after a mob gathered.

The remains of the victim has been deposited at the morgue.
Posted by Unknown
Labels: News