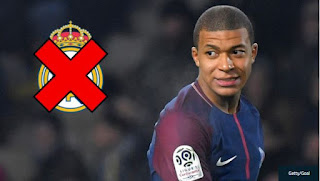 Kylian Mbappe will line up alongside Neymar, Angel Di Maria and PSG's other collection of stars at the Bernabeu on Wednesday night, but it could well have been an entirely different story.

The Ligue 1 side meet Real Madrid in arguably the tie of the round in the last 16 of the Champions League and, for Mbappe, it represents an opportunity to face a set of opponents who could have easily been his team-mates.

As has been well documented, and confirmed by coach Zinedine Zidane, Madrid were most definitely in the race to sign Mbappe in the summer of 2017.

So, what went wrong?

Madrid were European champions, league winners too. They possessed a French head coach who happens to be one the greatest players of all-time and, crucially you would've thought, they had Cristiano Ronaldo - Mbappe's childhood hero.

That's not to mention the impressive wages that would've been on offer from Los Blancos, the prestige of playing at the Bernabeu, the club's illustrious trophy-filled history, their Galactico ethos. The list goes on. It seemed Mbappe to Madrid was a no-brainer.

But, perhaps surprisingly to many onlookers, he still chose Paris.

Why? The main reason was the project, and the guarantee of regular playing time.

Mbappe, fresh from winning the league title with Monaco and announcing himself as one of, if not the brightest young talent in European football, had to be a pivotal part of the starting XI.

With the presence of Ronaldo, Gareth Bale, Karim Benzema, Isco, Lucas Vazquez and Marco Asensio this was not something Madrid could offer. With a World Cup around the corner, that just wasn't good enough for Mbappe.

The next reason? Paris. The French capital was where Mbappe was born and grew up. This was his city, and PSG was going to be his club.

As the man himself told Marca in December: "[Joining Madrid] would have been like a Real Madrid-supporting kid from Madrid having the chance to play for his team and deciding to go somewhere else, to another country."

And the final reason? Money.

That's not to say that Mbappe is motivated solely by monetary gains or that he smelt PSG and their cash coming from a mile off. Far from it.

The fact is that PSG are a financial powerhouse in the modern game and they were willing to pay a significant figure to make sure they got their man.

Madrid, for their part, couldn't, or at least chose not to, compete with PSG's riches.

L'Equipe reports that the 19-year-old is the third-highest paid player in Ligue 1 and earns around €1.5 million per month.

That sort of money would've put this, albeit supremely talented, teenager with just the one league title to his name in the same wage bracket as the likes of Ronaldo and Bale.

That, financially and almost certainly with one eye on keeping their current mega stars appeased, just didn't add up for Madrid.

Mbappe's decision to swap Monaco for PSG certainly wasn't the spur-of-the-moment, hasty decision of a teenager who didn't really know what he was doing. Quite the opposite, in fact.

As Mbappe continues to star in the French league, Madrid fans will be left wondering what might have been. And, on Wednesday night, there's every chance he'll show Florentino Perez, Zidane and all those connected with the Spanish club exactly what they're missing.
Posted by Unknown
Labels: Sports