It was a dramatic moment today as Peoples Democratic Party (PDP) chiefftain, Olisa Metuh, arrived the Federal High Court in Abuja, venue of his ongoing corruption trial on a stretcher after being taken down from an ambulance.

It would be recalled that a Federal High court presided over by Justice Okon Abang had denied a request by Metuh's lawyer for a long adjournment owing to his client's health condition. 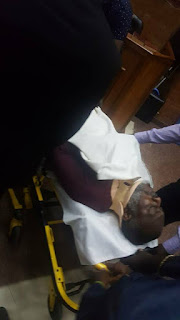 He had told the court that his client was at the Nnamdi Azikiwe specialist hospital for treatment on spinal cord complications.
But Okon Abang refused the application for a long adjournment and threatened to allow the application made by the prosecution for the revocation of Metuh’s bail if Metuh was not in court on Monday.