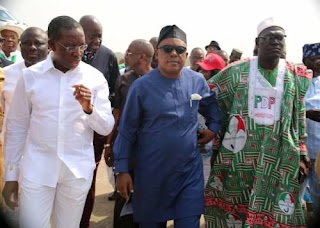 Secondus said Obasanjo's coalition is dead on arrival, adding that the All Progressive Congress (APC) failure to provide good governance will be a yardstick for Nigerians to vote for candidates of the People's Democratic Party during the 2019 general elections.

The party chieftain who spoke shortly before the commencement of a meeting between the national working committee of the party and PDP Governors, noted that the coalition cannot be the solution to the current problems facing Nigeria, expressing confidence that Nigerians will speak with one voice through their voters' cards by voting for the PDP in the 2019 general elections.

He said; "As we speak, the coalition leaders are already talking with us and we know they will come to join us. The weakest point in the history of the PDP is that we lost in the 2015 elections but, we should take advantage of the monumental failure of the APC, they came with a government of vengeance, we must emphasise to our people to get their voters’ cards because Nigerians want us to come together and rescue the country in 2019. The NWC is in Delta state Asaba to consult with our Governors and we are presenting our roadmap to victory to them."

Secondus said he believed Nigerians were disappointed with the failure of President Muhammadu Buhari-led administration, and were prepared to vote out the APC government in the 2019 elections. He also said the PDP would no longer impose candidates and would devolve powers to its state chapters.

“We vowed not to repeat the order of imposition, and we have reassured our leadership and our people that we will devolve power down to the states so that they can take responsibilities and make sure that whatever names that are submitted would not be changed.”

The opposition leader also spoke on the possibility of return of some top PDP members who joined the All Progressives Congress in the build-up to the 2015 general elections. Some of those include Senate President Bukola Saraki, and ex-governors Musa Kwankwaso and Danjuma Goje.

Saraki and his political ally, Governor Abdulfatah Ahmed of Kwara have denied planning to return to the PDP.

“I believe that they would soon come back,” Secondus said. “There is fear in the country, and very soon, you will see political tsunami that even the members of the ruling party would be coming en-mass to the PDP,” Secondus said.

“The Buhari administration is a colossal failure, and the entire country is aware of this.”
Posted by Unknown
Labels: News