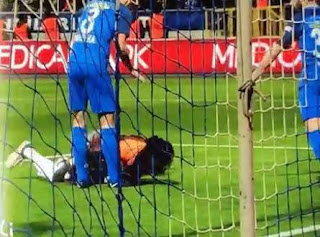 Photos have shown the moment a footballer, Bafetimbi Gomis caused a major scare when he collapsed while playing for Galatasaray.

However, according to The Sun UK, the 32-year-old Frenchman was unbelievably allowed to return to the field after being checked over by medics.

The Frenchman staggered forward before hitting the ground while the Turkish side were about to take a corner.

Gomis appeared to have lost consciousness in just the seventh minute of the contest. 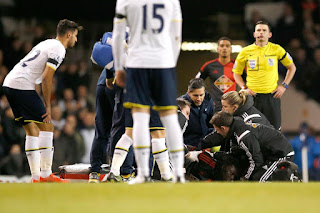 Worried players from both sides rushed to his aide and encouraged the medical team on the pitch as soon as possible.

But after a check by the medics, Gomis was back on the field just moments later.
It is not the first time Gomis has fainted while on the pitch.

In a game for Swansea against Tottenham in 2015, he left the pitch on a stretcher after fainting in the sixth minute in a 3-2 defeat.

And in 2009 Gomis collapsed three times before being diagnosed with a vasovagal condition. 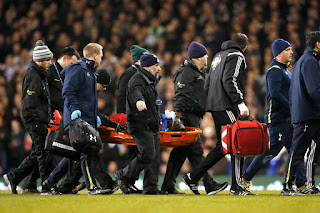 It is a low form of blood pressure meaning Gomis is susceptible to fainting when under stress or extreme temperatures.

After collapsing against Spurs, he tweeted: "I have been under a great deal of stress and fatigue due to my father's health that requires me to go back and forth to France."
Although flopping at the Swans, Gomis has been instrumental for Galatasaray this season.

He has scored 17 goals in 19 league starts including four in his last two matches.
Posted by Unknown
Labels: Sports