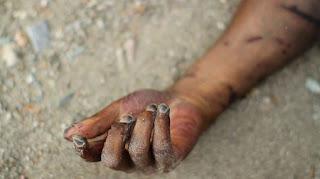 It was pure tragedy that struck on Wednesday at Amakohia-Uratta, in the Owerri North Local Government of Imo State, when a man identified only as Ibe allegedly killed his two-year-old daughter, Nkechi.

According to a report by Punch Metro, an eyewitness said Ibe, a businessman from Umuezeogu, Eziani Ihiala, in the Ihiala LGA of Anambra State, mistakenly hit the victim with his car.

According to the witness, who did not want to be named, Ibe had handed over the child to a housemaid.

He reportedly asked the maid to take her into the house as he made to drive his Toyota Camry.

Ibe was reversing the car when the child, who was at the back of the vehicle, was crushed to death.

The source said, “The man did not know that the girl was at the back of the car. He had reversed with speed when people around raised the alarm that he had killed the little girl.”

After alighting from the car in haste, Ibe, who was said to be in his late 30’s, saw that he had smashed the head of his only child.
He reportedly carried the lifeless body of the child as he wept.

“He wondered what he would tell his wife, who had left for a burial the previous day,” the source added.

Punch Metro reports that the child was taken to a mortuary with the help of friends and neighbours.

The state Police Public Relations Officer, Mr. Andrew Enwerem, said the report had yet to get to him.
Posted by Unknown
Labels: News