Over One Million Cows Flood Benue Despite Military Presence 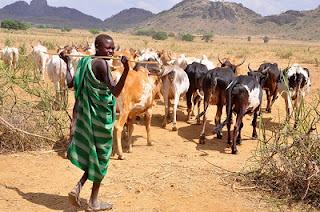 The governor dropped this hint when he led the senior pastor of Dunamis International Gospel Centre, Paul Enenche, and his wife, Becky, to the cemetery of the 73 victims of the New Year Fulani herdsmen attacks.

The governor hinged his alarm on the influx of over one million cattle into the state despite the launch of Ayem Akpatuma military exercise last Tuesday.

Governor Ortom, who decried the influx of herdsmen into the state, appealed to the military to flush out the invaders so that the over 160,000 displaced persons who had been in eight camps could return to their homes.

Ortom further said that more than 60 persons, including three people killed last week in Guma Local Government Area of the state, have been killed since the mass burial of the 73 persons initially killed by herdsmen in the New Year attacks.

“We appreciate president Buhari for the deployment of soldiers to the state to keep the peace, but our concern is the influx of over one million cows into the state despite the presence of the military.”

Conducting funeral service at the cemetery, Enenche anointed the land to signify the breaking of the yoke, declaring that the burial would also connote the interment of security failure, impunity, Jihadist agenda and all forms of evils.

He also prayed for God’s judgment against the killers and their sponsors throughout the country and charged the earth to rise up against them.
Posted by Unknown
Labels: News