Menu
Home » News » Our Role In The Release Of The Abducted Chibok Girls, Others - The Red Cross Opens Up

Our Role In The Release Of The Abducted Chibok Girls, Others - The Red Cross Opens Up 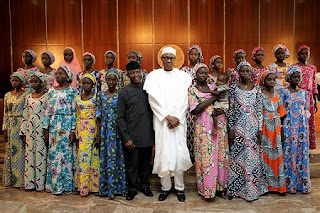 According to a report by Vanguard, the International Committee of the Red Cross (ICRC) has shed some light on its roles in the release of the Chibok girls and others, taken hostage by the Boko Haram.

The Head of Delegation of ICRC, in Abuja, Mr. Eloi Fillion, told journalists, in the nation’s capital, yesterday, that its role was the implementation of deals between the federal government and the insurgents.

According to him, “We are not involved in negotiations or how the deals are reached. Our role starts when the deal is reached. As a humanitarian organization, we focus on the implementation of deals between parties in an armed conflict.

“We are not part of the negotiations that bring about the release. Our role is to act as an intermediary to help when deals are reached between the fighting parties. We have been called to play this role three times.

“The deal is reached without us. When we are called, what the ask of us is the space and time to implement the deal.

Asked why the Red Cross which has access to the insurgents does not engage them with a view to ending the conflict rather than concentrating on mitigating the effects of the conflicts on the civilian populace, Mr. Fillion said that the mandate of his organization did not extend to resolution of armed conflicts.

Besides, he said “We don’t have the mandate to resolve conflicts. It requires competences and capabilities that humanitarian organizations like ours don’t have. But they are organizations that have that and in some cases sovereign governments play that role.”

The Red Cross boss denied ever being involved in ransom payments to Boko Haram , in exchange for those released from their captivity.

According to him, the organisation’s focus remained providing support for people affected by various forms of conflict and that it has provided such supports to over one million people in the North East, the Niger Delta , as well as, victims of the on-going crisis involving herders and farming communities across the Middle Belt.
Posted by Unknown
Labels: News