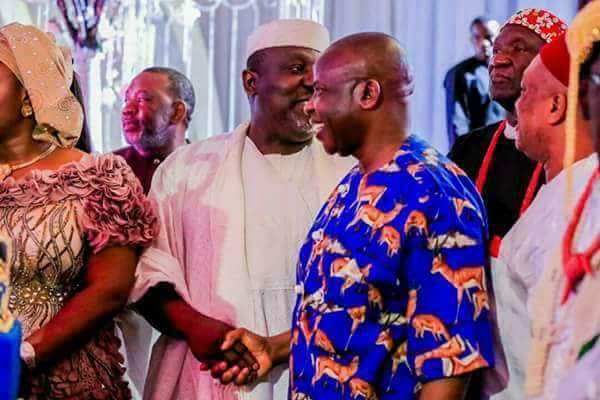 Our attention has been drawn to yet another gaffe from Governor Rochas Okorocha during his panic interaction with journalists at the government house, Owerri, on Monday, February 5, 2018, wherein he ran his mouth again like someone suffering from the diarrhea of the mouth, and said that His Excellency Dr Ikedi Ohakim should be taken to the psychiatric hospital for demanding that the honourable Judges of Imo State who are being owed 16 months salary should be paid without further delay.

Okorocha, a man who has no respect for truth went on to claim that the Judges are not being owed any salaries and allowances.

Ohakim owes a responsibility to speak out as a former Governor of the state. One of the Judges, Honourable Justice Opara, died recently without being paid his entitlement.

We hereby draw the attention of the Nigerian public to the suit number NICN/OW/58/2017 filed against Governor Okorocha by the Nigeria Bar Association (NBA) Owerri Branch, wherein they prayed the court, among other things, for "A declaration that the practice whereby the respondents withhold or refuse to pay the sitting Judges of Imo State High Court and Judges of the Customary Court of Appeal that portion of their remuneration released to the respondents from the Consolidated Revenue Fund is a breach of Oath of Office of the 1st respondent as the Governor of Imo State who swore to preserve, protect and not to mutilate it".

Okorocha does not seem to have any iota of respect for the office he occupies, otherwise he won't elevate falsehood to state policy. He has for example promised to conduct local government election 8 times and failed 8 times. This is what a people get when they inadvertently elect dubious characters into office where criminal conspiracy, abuse of office and the people, stealing, misappropriation of funds and financial rot leading to mass poverty become state policy.

Okorocha, if the truth must be told, is running one of the most corrupt administrations in Nigeria. Otherwise, how could a government pay huge sums of money to companies such as ELASON GLOBAL ENTERPRISES and LUFTANZA ENGINEERING SERVICES before they were even registered? Which bank cleared the money?

It has become clear to everyone that the only person Okorocha and his partners in crime are afraid of is Ikedi Ohakim, maybe because Ohakim knows the government inside-out and tracks all Okorocha's fraudulent activities.

The accusation that Ohakim would be on vengeance mission against Imo people when he returns to government house in 2019 is laughable. Okorocha may have forgotten so soon that he never won any election and that Imo people voted overwhelmingly for Ohakim in 2011. Imo people therefore know those who stole their mandate and have used it to punish the poor masses.

Anyone who has seen the level of ruination in Imo State, and the level of poverty, pain and death unleashed on the people by their own Governor would recommend that Okorocha, not Ohakim, goes for immediate psychiatric examination.

May we remind Okorocha also that leadership demands decorum and respect for truth, and leadership is not the same thing as wearing pampas.

Accusing Ohakim of wanting to come and loot is equally laughable. To loot what? After the mind boggling looting going on in Imo State, will there be anything left to loot? The biggest assignment for the government after Okorocha will be massive loot recovery, payment of outstanding salaries and allowances, repayment of over N200bn commercial and judgement debt, completion of abandoned projects, etc.

We can therefore understand the apprehension of those who have looted public funds and assets, but Imo should rest assured that our massive loot recovery will ensure that every kobo and assets looted will be recovered.