Ohakim Thanks Okorocha for Heeding to his Advise to Pay Imo Judges, As Judges Receive 6-Months Salary Arrears 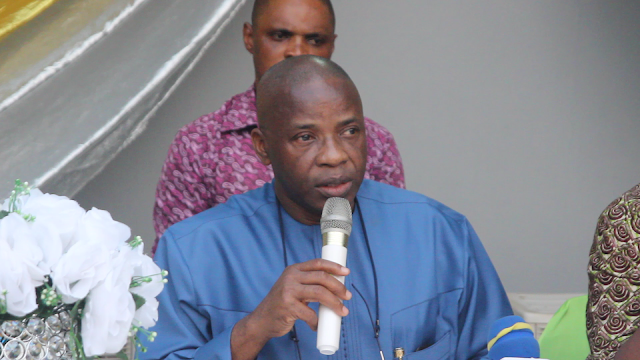 His Excellency Dr Ikedi Ohakim wants to appreciate Governor Rochas  Okorocha for heeding his wise counsel by paying the Judges in Imo State 6 months salary arrears out of the 16 months he owed them.

Governor Okorocha on Monday, February 12, 2018, hurriedly paid the Judges 6 months out of their 16 months salary arrears.

Dr Ikedi Ohakim equally thanks the more than 12,000 people who have already signed up for the planned mass protest in Owerri, including so many people from the United States of America (USA) and Britain who planned to come back home to join the mass protest.

We thank God immensely that His Excellency Dr Ikedi Ohakim's brain is intact, contrary to Governor Okorocha's insult,  and he did not need to be taken to the psychiatric hospital before the Judges were paid 6 months salary arrears. Dr. Ikedi Ohakim is nevertheless not worried about the insults from Governor Okorocha, some of his appointees and hirelings.

We equally thank the media which showed massive support and interest in the matter and insisted that the Judges must be paid.

We thank the Judges too for their patience, decorum and continuing to discharge their duties even when they were owed 16 months salary.

Our immense gratitude also goes to the Nigerian Bar Association (NBA) for taking the matter to court on behalf of the Judges. We are really proud of the NBA in Imo State for living up to their responsibities.

We therefore request Governor Okorocha to please do everything humanly possible to pay the balance of 10 months salary arrears as quickly as possible, while we put the protest on hold.

Dr Ikedi Ohakim also extends his heart felt condolences to the family of a retired Justice who passed on on Monday, February 12, 2018. Unfortunately he died without adequate medicare as a result of non payment of his accumulated pension and gratuity.

Now that Governor Okorocha has started paying the Judges, he should also pay those who have served the state meritoriously their pension and gratuity without further delay.

Workers deserve their wages. The first line charge of every government is the welfare of the people, and the civil servants and pensioners deserve their pay and must be paid as at when due.

Dr Ikedi Ohakim is prepared to offer wise counsel to the Governor on how to get those problems solved in no time.

Dr Ikedi Ohakim is not a man that finds pleasure in spreading falsehood. He says what he is only sure of and believes so much in the truth.

He will continue to speak for Imo people and the disadvantaged, no matter the risk involved. And when by the grace of God he returns to office in 2019, he will continue to treat the workers and every other segment of the Imo society very well and ensure that their comfort and welfare remains top on the agenda of his government.