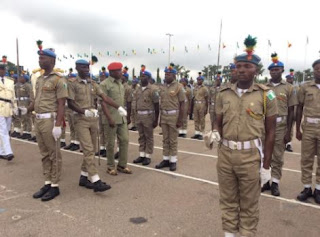 A middled-aged man in Nappe, Dukku Local Government Area of Gombe State on Tuesday, reportedly set himself ablaze following the refusal of President Muhammadu Buhari to assent to the bill for the establishment of Peace Corps of Nigeria
The victim whose name was given as Gambo Timothy Dogo, was until his demise a voluntary member of the corps.

IDOMA VOICE, gathered that Dogo, a father of two, who hailed from Borno State committed suicide by setting himself ablaze in his one room apartment on hearing that the President has turned down the PCN establishment bill.

An eyewitness told Ehido that Dogo had attempted suicide the last time news broke out that the bill was rejected.

A source said Dogo gave reason for his action in a text message sent to his colleague simply identified as Ahmed Tuesday afternoon around 3pm before embarking on the suicide mission.

When contacted, Public Relations Officer (PRO) Gombe State command of the Peace Corps said she was not authorized to speak on the incident. In the same vain, the national spokesperson of the organization, Milicent Umoru neither picked nor returned our calls.

Meanwhile, the Gombe State Police command is yet to react to this incident at the time of filing this report.
Posted by Unknown
Labels: News