Menu
Home » Politics » 'I don’t know Uche Nwosu from Adam. I met him on the road in 1999', Okorocha Reveals

'I don’t know Uche Nwosu from Adam. I met him on the road in 1999', Okorocha Reveals 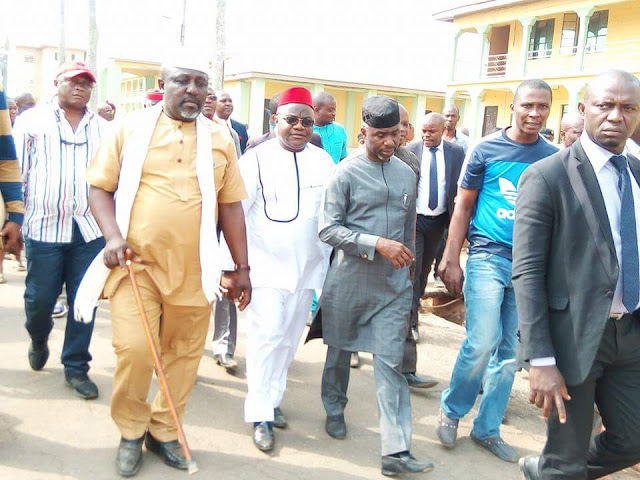 Says,... "we are still patching Senator Benjamin Uwajumogu to be recognized".

... Reveals 2011 conspiracy between Him, Udenwa and Araraume on how to Remove Ohakim

Imo State Governor, Rochas Okorocha has availed that he was willingly ready to sacrifice the governorship position of the state to Sen. Ifeanyi Araraume if he had listened to him.
Okorocha disclosed this while playing host to the leaders of Isiala Mbano who paid him a courtesy visit at the Government House, Owerri on Tuesday.
According to Okorocha, in several meetings with the Isiebu-Mbano born politician, he has advised him to follow certain political path which would have yielded him better result but he did not heed the advice.
He regretted that why the state has not progressed the way it should have is because some Imo people have refused to see things from his view as well as not being willing to make the needed sacrifices for the state.

“I see into the future. This is my regret for Araraume. During a Christmas of two years ago, I called him and told him that I want him to go to senate. That was also the period they want to remove Athan Achonu. I was the one that said his name should be changed to Araraume because I know that if Araraume get to the senate, he would get senate president. And senate president is bigger than governor. I saw that but he refused.
“I even took his son and made him commissioner. I had plans to make that boy somebody. I wouldn’t say it now. It could have shocked the whole nation. But he told me to forget about my plans for his son and that was when I lost my confidence in him.
“Do you mean if somebody come and say that I should allow my son, Aham to complete from where I am now as governor and Imo people agree, to God who made me, I will allow him.

“You see Ben Uwajumogu that went to the senate, we are still patching him to be recognized. Does he speak in the floor? But it would have been different if it is Araraume that is the person there (Senate). He would done better but people don’t understand.
“When we are contesting for governor, I, Araraume and Udenwa had meeting at Udenwa’s residence at Abuja. I told them to allow me go to senate (Orlu), that Araraume should go for governor. You can go and ask Araraume, ask Udenwa. It is true before God and man.

“So leaders must be willing to make sacrifice. Even, I was ready to sacrifice the governorship to go for senate because I saw the situation. So all these efforts is to help our state and to help our generations yet unborn.
“So our people should learn to listen to leaders in their midst but my people don’t listen to me.” Okorocha said.
The Imo governor also expressed optimism that the arrays of leaders he has identified and trained in the course of his leadership of the state are people who are capable and credible enough to take the state to enviable height after his tenure.

“I am identifying key people, giving them leadership opportunities. I have identified one in Ohaji/Egbema, called Kingsley Uju and many of them including Uche Nwosu. I don’t know Uche Nwosu from Adam. I met him on the road at Wethedral road when I was contesting governor in 1999.

“Till today, I don’t know his father or his mother. I brought him into my house because the boy is hardworking and sincere and from there, he saw my daughter and married her. If not that, I don’t know him before. I have only being to his house once.

“You can see that there are difference from the emerging leaders under me like Kingsley, Uche and others. You can’t compare them with what other governors have produced because they are mindful of tomorrow.
“There is no body that I called to work with that I don’t have some plans for. It could be federal house, it could be senate, it could be governor, it could be anything.
“So I train leaders. The difference between me and other past governors is you will see the result from the lives and works of the people I trained. I have produced more millionaires, more leaders than anybody has produced in the state.” Okorocha said.
Posted by IfeanyiCy Njoku
Labels: Politics