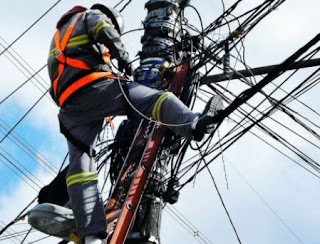 I don’t know how to translate this into English, but “ohun t’aba wi f’ogbo, logbo ngbo…” is the most popular Yoruba incantation used by Ifa believers to spellbind an individual; hypnotise the enemy or arrest an awkward situation. But some Ifa adherents don’t have to chant incantations. They are incantations themselves! The Araba of Osogbo, Chief Ifayemi Elebuibon, belongs to this class of esoteric clan of Ifa votaries.

It was about midday in the heart of Osogbo.

Some officials of the Power Holding Company of Nigeria were on a mass disconnection at the Ayetoro area of the city capital. Snaillike, their vehicle inched towards Ifayemi Elebuibon Street, stopping at the very pole in front of the expansive residence of the Ifa priest. Four PHCN officials alighted from the vehicle. A group of residents, whose electricity cables had been disconnected some distance up the street, had followed the vehicle on foot. The leader of the team, a dark-skinned middle-aged man, opened a conversation with the restless residents.

Two men, who appeared to be the youngest in the PHCN team, brought down a brown, long wooden ladder hinged to the top of the pickup. As they were mounting the ladder against the pole, Elebuibon came out of his compound. He greeted them and asked what their mission was. The team leader told him that they were going to disconnect the cable supplying his house with electricity unless he produced a bill showing that he was not owing the PHCN.

The babalawo told them that he was not owing the PHCN and added that it was not his place to produce any bill. He said the PHCN should have a record of those who had paid up their bills just as he stressed that he had never owed electricity tariff all his life. Some residents intervened and told the officials that the Araba never owed electricity bills.

Shunning all entreaties, one of the PHCN officials rebuffed the pleas and started to climb the long ladder. Residents yelled and told him not to climb the ladder, but he refused, climbing and grumbling. Elebuibon raised his hand, saying ‘e je o gun, to bati le bo’le’; meaning: let him climb the ladder if he would be able to climb down from it.

He couldn’t disconnect the cable, neither could he come down. Looking as cool as cucumber, he chewed a gum slowly, absent-mindedly and remained at the top of the ladder, blinking and oblivious of the flood of pleas gushing on his behalf down below.

The other three PHCN officials at the foot of the ladder sweated and begged. Together with residents, they pleaded with Baba Elebuibon to set the young man free. Elebuibon yielded.

‘Arakunrin, ma bo nle (young man, come down),’ he simply said, snapping the detainee out of his forced reverie. The Ifa priest later told one of his children to go inside his house and bring the bill showing he had paid his electricity tariff. Elebuibon was able to resist the highhandedness earmarked for him by the PHCN, but do millions of Nigerians, whose businesses and well-being are tied to electricity supply, have the arcane power to such do?

The commonest testimony that governmental injustice and corruption freely and daily stalk our land unchallenged is the PHCN. Injustice and corruption aided, abetted and perpetrated by the government against the people. Or what better adjectives are there to qualify a government parastatal that collects citizens’ hard-earned money and yet refuses to provide the commodity for which they paid? Worse still, those that pay brazenly have their power supply cut if they were not around to show the almighty PHCN officials their bills.

The inability of the Economic and Financial Crimes Commission to bring just one ‘oga’ to book despite the trillions of naira that have gone down the PHCN drain since 1999 shows the corrupt nature of the country’s anti-corruption fight. Nigerians watch hopelessly as yesterday’s corrupt politicians have had their iniquities washed with hyssop and a detergent called defection while the EFCC bays at the midnight moon.

The crazy bill phenomenon by the PHCN is the crowning of the nation’s abhorrent corruption behemoth. How a government could watch and support the fleecing of her citizens year in and year out without a twinge of compunction beats the imagination. And all the agencies, state and national parliaments statutorily constituted to check underhand practices in the various segments of the economy look the other way as the python of corruption and insensitivity encircles the citizenry. A Nigerian-American living in Huntsville, Alabama, Olusegun-Richard Adeyina, said he has witnessed uninterrupted power supply since relocating to the US 16 years ago.

A report by the Socio-Economic Rights and Accountability Project said at least N11tn meant for the provision of adequate electricity for Nigerians was squandered under ex-Presidents Olusegun Obasanjo, Umaru Yar’Adua and Goodluck Jonathan.

The report also warned that the ‘financial loss to Nigeria from corruption in the electricity sector’ may reach N20tn in the next 10 years.

The report, which was presented to the media by an Associate Professor of Energy and Electricity Law, University of Lagos, Yemi Oke, some months ago, said, “The much publicised power sector reforms in Nigeria under the Electric Power Sector Reform Act of 2005 is yet to yield desired and/or anticipated fruits largely due to corruption and impunity of perpetrators, regulatory lapses and policy inconsistencies. Ordinary Nigerians continue to pay the price for corruption in the electricity sector – staying in the dark, but still made to pay crazy electricity bills.

The Obasanjo administration spent $10bn on NIPP with no results in terms of increase in power generation. $13.278,937,409.94 was expended in eight years while unfunded commitments amounted to $12bn. The Federal Government then budgeted a whopping N16bn for the various reforms between 2003 and 2007, which went down the drain.”

Oke said that the country had lost more megawatts in the post-privatisation era due to corruption and impunity, among other social challenges reflected in the report.
Largely owing to insatiable greed and cronyism, the privatisation of the power sector carried out in November 2013 has worsened the electricity misery of Nigerians, instead of alleviating it. The excuse of liquidity challenge and damage to gas pipelines by the distribution and generation companies are a reflection of corruption and operational inefficiency. It is only in Nigeria that power firms could ask for the fulfilment of N100bn subsidy fund after the National Electricity Power Authority assets were sold off ten a penny.

Despite collecting monthly tariffs from Nigerians for electricity they never supplied, it is insensitive that these firms are yet clamouring for consumers to pay cost-reflective tariffs – to reflect the devaluation of the naira and rise in inflation. My take; if due process was followed to the letter during the privatisation exercise, the country won’t arrive at this rack and ruin.

I don’t give a hoot about the good-for-nothing improved-power statistics being bandied about the Minister of Power, Works and Housing, Babatunde Fashola. But I give a fig about the huge number of Nigerians whose lives have been snuffed out by generator fumes, despite paying through their noses crazy electricity tariffs by the most inefficient power company on the planet. I worry stiff about the millions of Nigerians – long dead and buried – on whom mosquitoes sneaked in when they opened their windows and doors to keep alive from PHCN-induced suffocating heat.

Does the way Nigeria treats adequate power supply, which remains the greatest change factor in this industrialised century, not suggest that we are truly a “wasted generation”?

Unlock the potential of the country; provide electricity – therein lies the key to prosperity.