Herdsmen In Gun Battle With Soldiers In Benue As Military Prevent Attack On Gov. Ortom's Farm 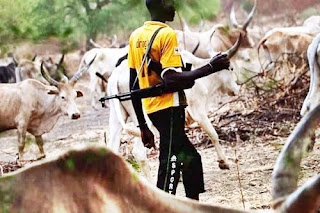 Killer herdsmen have engaged operatives of Nigerian Army's special forces brigade in Makurdi in a gun battle as the herders attempt to attack the state governor's farm.

In a statement issued on Thursday by Olabisi Ayeni, spokesman of the military's 707 special forces brigade, disclosed that suspected herdsmen engaged men of the the Nigerian Army, in Makurdi, Benue state in a gun battle on Tuesday.

According to TheCable, Ayeni who disclosed further that the suspects were plotting to attack a fish farm belonging to Samuel Ortom, governor of the state, said two of the attackers had been arrested.

“Troops of 707 Special Forces Brigade, Nigerian Army, on a routine patrol along Gbajimba – Iyiodeh road in Guma LGA of Benue State on Tuesday 6 February 2018 arrested two Fulani militia who were suspected to be planning a dangerous mission,” he said.

“The troops sighted a group of these people while on their daily patrol. The militia who were suspected to be converging, possibly for an attack on Governor Ortom’s fish farm and other innocent citizens were about to be approached for questioning when they opened fire on the troops who later engaged them.

“When the troops accosted the herdsmen, they opened fire on the troops, who in turn engaged them in a shootout. In the course of the shootout, some of the herdsmen fled the area while two were arrested and handed over to the police.”
Posted by Unknown
Labels: News