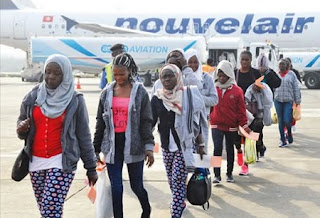 According to Punch Metro, Mr. Sani Datti, the Head of Media and Public Relations, National Emergency Management Agency in a statement on Friday in Abuja said the returnee was 32 years old and hailed from Ogun State.

He stated that “she was among the 5th Batch of returnees evacuated from Libya on board Medview Air that arrived Port Harcourt on Monday night.

“She arrived sick and was immediately taken in a waiting NEMA Ambulance to University of Port Harcourt Teaching Hospital where she was admitted.

“She was treated of vomiting, general weakness of the body, abdominal pains and associated illness.

“She, unfortunately, died early on Wednesday, February 15, 2018, two days after admission in hospital.”

Datti noted that contacts had been established with her parents and arrangements were being made to convey her remains home.
Posted by Unknown
Labels: News