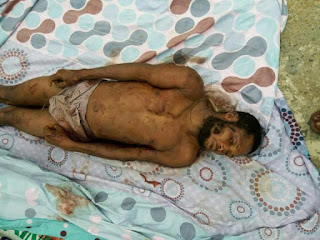 Information revealed that Augustin was shot dead by officers of the department of Department of State Services (DSS) alongside a combined team of troops of eighty-two Division Nigerian Army Enugu who raided his hideout to arrest him and his other accomplices.

The kidnap kingpin and mass murderer, Don Wanny was killed in his hideout in Enugu state earlier this year.
A They attempted to escape through the back exit of the apartment and were shot down by the eagle eyed troops in the process.

The notorious gang of criminals murdered 23 peace loving citizens of Omoku in Rivers state when they were returning from Cross Over Service at about 1:30am on Monday 1st January 2018.

The CSO of Late Don Wanny who was amongst the 32 Cultists declared wanted by the State Security Council was killed following accurate DSS intelligence.
Posted by Unknown
Labels: News