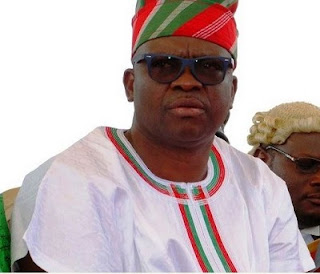 The Ekiti State Governor, Mr Ayodele Fayose, has reiterated his call for the resignation of President Muhammadu Buhari, describing the present insecurity and economic problems in the country as evidence of the President’s cluelessness and inability to steer the ship of the country.

The governor said; “For a President that was elected because he promised to fight corruption and clear the Northeast of the Boko Haram insurgents within three months, the signs that he must take a bow and return home are clear even more than crystal.”

In a statement issued on Saturday, by his Special Assistant on Public Communications and New Media, Lere Olayinka, the governor said latest events in the country, especially the abduction of over 100 pupils of the Government Girls Technical College, Dapchi, Yobe State, and the Transparency International (TI) damning report revealing that the perception of corruption in Nigeria worsened between 2016 and 2017, further vindicated his position before the 2015 presidential election that President Muhammadu Buhari lacked the required capacity to govern a diverse and complex nation like Nigeria.

He said; “President Buhari promised Nigerians that he will bring back the missing Chibok Girls and defeat Boko Haram within three months.

After more than 32 months in office, Boko Haram is still killing Nigerians, with herdsmen also on a killing spree.

“Painfully, the same Boko Haram they claimed to have defeated suddenly became strong enough to kidnap over 100 students.

Now, Nigeria is not only looking for the remaining Chibok Girls, another over 100 innocent students have joined, this is unacceptable!

“Funny enough, a few days ago, the President called on all Nigerians to be prepared to pay the ‘ultimate price’ for the progress and unity of the nation and I wish to ask him what other price does he wants Nigerians to pay.

“Already, Nigerians are sacrificing their lives by getting killed while seeking what to eat. Some have even committed suicide! Yet, the same President who is enjoying all the benefits of his office is calling on Nigerians to forgo personal pleasures and pay the ultimate price. ”

Governor Fayose, who described those urging President Buhari to seek reelection as selfish people who do not have the interests of Nigerians at heart, added that no right-thinking Nigerian would pray to have the fate of the country in the hands of a clueless individual like President Buhari for another four years.

“Is President Buhari going to justify that within 30 months, Nigeria’s debt that was N12.06 trillion in 2015 increased by over N10 trillion?

“Fact is that Nigeria is under a rudderless federal government. Everything is now upside down, with everywhere in the country becoming insecure. What Nigerians expect in a situation like this is a clean break from this calamitous government and new breath of life, not a continuation of a government lacking direction.”
Posted by Unknown
Labels: News