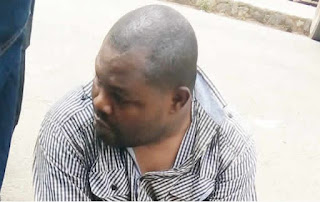 Tayo Ogunleye, a jobless 39-year-old man, has been arrested by the Oyo State Police Command for allegedly defrauding job seekers by claiming to be the marketing manager of Shoprite, a retail store on Ring Road, Ibadan.

According to Punch Metro, the state Commissioner of Police, Abiodun Odude, said the suspect promised his victims non-existing jobs at the store if they paid certain amount of money to him.

According to the CP, the suspect usually issued his victims fake appointment letters after they completed the payment, and went into hiding.

Odude said, “The suspect, who posed as the marketing manager of Shoprite, defrauded 28 complainants by promising them jobs that never existed. He obtained various sums of money from them and to convince them, he issued several fake appointment letters on the letterhead of the multi-national company.

“His arrest at the Apata area of Ibadan on January 31, 2018, followed a complaint made against him at a police station by Yusuf Yekeen, who was one of Ogunleye’s numerous victims.”

Some of the victims told Punch Metro that the suspect took them round the company as if he was going to offer them contracts to fix some infrastructure.

One of them, who simply identified himself as Adeola, said, “I am a building engineer and I also handle interior decoration. He took me there (Shoprite) and we went round together. He said some shops needed repairs and new ones needed to be constructed. He also said extension work would soon begin at the complex.

“He gave me the impression that he was in charge of contracting the jobs out as a manager of the company. I believed him because things were hard for me and I needed a job to feed my family. The economy of the country limits job offers for artisans like me because people are concerned with spending money on food, school fees and other more important things than building houses or fixing interiors of their houses.

“He later entered a shop and said he wanted to discuss with someone. I thought we were to enter together, but he asked me to wait outside.

“When he came out, he held an envelope to deceive me and give himself a corporate image. I did not know what was inside. He asked me to complete the payment so that I could move in and begin to work. I raised a total of N100,000 for him.”

Odude said the suspect would be charged to court at the end of investigation.
Posted by Unknown
Labels: News