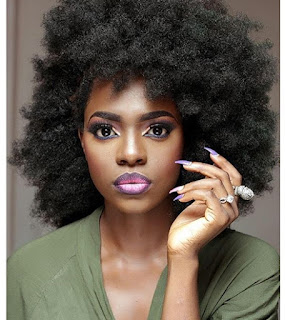 Former Big Brother Africa housemate, Beverly Ada Osu, has taken to social media account to reveal her encounter with an elderly man she recently met at the bank.

The fast rising Nollywood actress who shared this story on her Instagram handle, disclosed that the elderly man appreciated her works and her personality and all she had to say was thank you.

She revealed further that the man told her he and his wife quarrel most times at home because of her, adding that the man's wife blocked her from his Instagram but fortunately for him, his son opened another account for him.

Her post reads: “So I met an elderly man at the bank yesterday, he was so excited to see me, meeting me for the first time… He kept complimenting my smile, my politeness, my eyes etc. But I can only say thanks so much sir.

"Then he said, I love you so much, my wife and I have had arguments and fights over you, she even took my phone and blocked you on my Instagram and Twitter… But I let it go for peace to reign in my home. I said women know best sir and he replied, not to worry I’m still following you my son opened another account for me.” 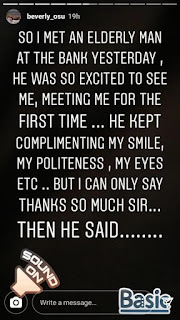 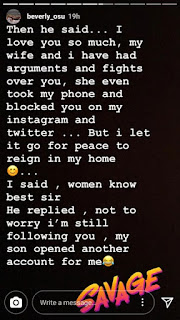