Menu
Home » Sports » End Of The Road For Conte: Chelsea Manager Challenges Abramovich To Sack Him After 4-1 Loss To Watford

End Of The Road For Conte: Chelsea Manager Challenges Abramovich To Sack Him After 4-1 Loss To Watford 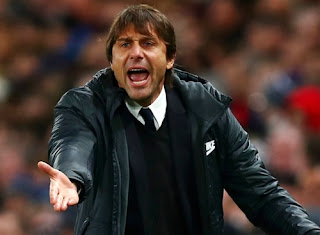 Shortly after Chelsea were thrashed 4-1 by Watford on Monday night, Antonio Conte challenged the club's board to ‘take the decision’ of sacking him.

The Blues lost by three goals for the second consecutive game and Conte watched on helplessly as the Hornets scored three in the last seven minutes against his side at Vicarage Road.

The Italian tactician had earlier urged the club to back him publicly earlier this week to quash speculation that former Barcelona boss, Luis Enrique is set to replace him.
Chelsea are yet to do so and Conte challenged his board last night to make a decision on his future after his side’s performance against the Hornets.

‘No, no this is not my problem,’ said Conte, when asked about his future. ‘I try to do my job, I put everything into my job. If it’s enough then fine but if not they can take the decision [to sack me].

Conte guided Chelsea to the Premier League title during his debut campaign at Stamford Bridge but his second season has been marked with controversy.

The Italian has consistently criticised the club’s transfer policy and says his side’s peformances this term are down to the squad’s lack of depth.
Posted by Unknown
Labels: Sports