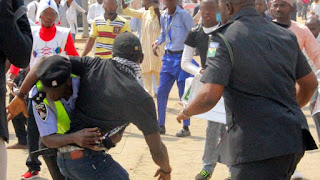 Two teenage boys of a police superintendent — Abubakar Bello and Sikiru Bello — who allegedly beat up two superintendents of police with belts, were on Monday brought before an Igbosere Magistrates’ Court in Lagos.

The two siblings whose ages are 16 and 19, are standing trial alongside a 33-year-old woman, Risikat Arowolo, on a two-count charge of conspiracy and assault.

The Prosecutor, Sgt. Peace Chukwudi told the court that the accused committed the offences on Feb. 10 at Macarthy Police Barracks on Lagos Island.

She said the trio conspired and assaulted the two police officers, who also live in the same police barracks with the accused.

“The accused assaulted the officers by beating them with a belt and pushing them in the drainage.”

The offences contravened Sections 172 and 411 of the Criminal Law of Lagos State, 2015.

The News Agency of Nigeria (NAN) reports that Section 172 provides three years imprisonment for assaulting an officer, while Section 411 recommends a two-year jail term for conspiracy.

The two siblings pleaded not guilty.
Magistrate Patrick Adekomaiya granted them bail in the sum of N50,000 each with one surety each in like sum.

He said the sureties must produce their bank statements and evidence of tax payment to the Lagos State Government as part of the bail conditions.

The case was adjourned until March 14.