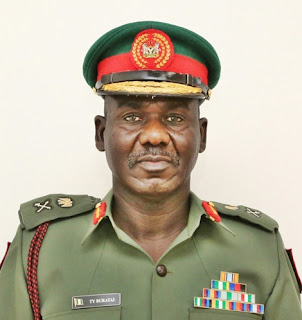 The Chief of Army Staff, Tukur Buratai, has fired a warning to the leader of Boko Haram sect to surrender now before he is consumed by the troops who have reportedly closed in on the remnants of insurgents.

In the poem titled “End of the Road,” and posted on his official Facebook account on Wendesday, January 31, the Chief of Army Staff, Lt. Gen. Tukur Yusuf Buratai, issued a strong worded poem to the dreaded leader of the Boko Haram group to either surrender his arms and embrace peace or face perdition.

The Army chief expressed satisfaction that most of the foot soldiers of the sect have either been crushed or escaped leaving the acclaimed leader without defense.

Buratai who further expressed confidence that the era of preaching fake ideology to gullible citizens who became radicalized to take up arms against the nation is over, assured that peace will return and the country will return to its place of honour.

Read his poem below:

*************
‘End Of The Road’
“It’s time to surrender
The deceit is over
Fake ideology preached no more
Surrender before the patient birds
Hovering above you ready to land
Easy prey you are today Shekau
Your foot guards perished
Your foolish pawns escaped
Abandoned you to your follies and perils
Victorious troops celebrate
The pride of the Nation
Never again for peace to elude
Our land of honour to rise greater than before.”
Posted by Unknown
Labels: News