Chelsea vs Barcelona: Conte Reveals Why He Benched His Strikers, Morata & Giroud In 1-1 Draw 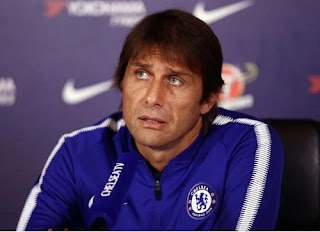 Antonio Conte says Chelsea’s performance against Barcelona justified his decision to play without a recognised striker, despite giving away a potentially decisive away goal.

The Blues who left Alvaro Morata and Olivier Giroud on the bench, stifled Barca throughout before taking the lead through Willian, who was playing behind false No.9 Eden Hazard.

A late mistake from Andreas Christensen gifted Barcelona an equaliser though Lionel Messi, but Conte felt his side executed his gameplan which had no orthodox frontman almost flawlessly.

Asked whether he felt vindicated in not starting a striker, Conte told BT Sport: ‘I think that when you have to play this game you must have a plan.

‘You must respect the characteristics of the opponent to choose which is the best way to face this team.

"I think our plan was really very good. The effort of the players was great. It’s a pity because we are talking about 1-1 but maybe we deserved more tonight."

In an interview with Italian media, he added: ‘Playing Morata from the start, with him and Hazard, without Willian or Pedro, would’ve lost our balance. It would’ve been suicidal!’

‘I think that we were very close to the perfect game. I think only one mistake. As you know very well when you make a mistake against Barcelona, against players like Messi, Suarez and Iniesta, you have to pay.

‘It’s a pity, it’s a pity because I’m very proud of my players. They followed the plan we prepared for playing Barca. It’s a pity also because I think tonight we were a bit unlucky.’
Posted by Unknown
Labels: Sports