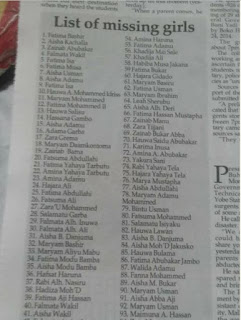 The names of 105 girls allegedly abducted by Boko Haram has been released.The girls were declared missing after an attack by terrorists on a school in Dapchi, Yobe State, earlier this week.

Parents in Dapchi, in Yobe State, said they had set up a support group after Monday’s raid, which has revived memories of the 2014 abduction of more than 200 girls in Chibok.

“Our first step was to compile a comprehensive list of all the missing girls. So far, we have compiled the names of 105,” said Bashir Manzo, the chairman of the newly created group.

Heavily armed jihadists stormed the boarding school in the remote town, forcing terrified students to flee into the surrounding bush.

PoliticsNGR has gotten the list of names of the missing girls published in The Nation.
Posted by Unknown
Labels: News