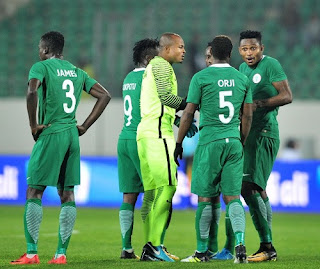 The home-based Super Eagles will be gunning for a historic final ticket at the African Nations Championships, CHAN, as they take on Sudan in the second semi-final at the ongoing tournament in Morocco.

Nigeria’s home-based Super Eagles have qualified for the final of this year’s African Nations Championship (CHAN) after defeating Sudan 1-0 in the semi-final on Wednesday night in Marrakech.

Nigeria who is reaching its first-ever final will face hosts Morocco in Sunday’s grand finale in Casablanca.

Gabriel Okechukwu was the hero for the Home Eagles as his first half goal was enough to seal a final berth. Both teams were reduced to 10 men as Ifeanyi Ifeanyi was sent off for Nigeria while Bakri Bachir received his marching orders for Sudan.

The Home Eagles were forced into an early change in the 11th minute as goalkeeper Ikechukwu Ezenwa was stretchered off due to an injury after colliding with Stephen Eze as they both attempted to stop a Sudanese attack and was replaced by Dele Ajiboye.

Sudan went very close on 15 minutes but Saifeldin Malik Bakhit was quickly closed down by Eze before Ajiboye gathered the rebound.

But it was the Home Eagles who took the lead in the 16th minute through Okechukwu who ran on to Anthony Okpotu’s knock down, sprinted towards goal before slotting the ball under the onrushing Sudanese keeper Akram El Hadi Salim.

Okpotu almost doubled Nigeria’s lead in the 20th minute after he was played through on goal by Rabiu Ali but hit his effort against the Sudanese keeper.

Okechukwu was unlucky not to have had his second goal after neatly beating his marker on the edge of the box but saw his low left-foot strike go inches wide.

In the 30th minute, Sudan had a chance after their player spotted Ajiboye off his line and attempted a long strike but the Home Eagles second choice got back quickly to make an easy save.

Sudan went on a counter after Osas Okoro gave the ball away in the opposition half but Bakhit’s header from a cross went just wide off target.

With a minute left in the first half, Ajiboye made a double save, first beating a Sudanese player to a cross before diving full length and palming a goal-bound header against the post before Kalu Orji cleared the rebound.

One minute into the second half, Okechukwu missed a big chance to make it 2-0 after he was played through on goal only to fire a tame left-foot strike which the Sudanese keeper easily picked up.

The Sudanese keeper was called to action again in the 50th minute as he flung himself to stop Dayo Ojo’s shot from the edge of the box from sneaking in.

Sudan should have equalised in the 55th minute following a brilliant interchange of passes but Ajiboye got down well to make the save.

In the 58th minute, Ifeanyi was shown a second yellow card and was sent off for a dangerous tackle.

Sudan had a chance to level scores in the 65th minute after Suleiman Omer found himself facing the Nigerian goal but misfired.

Ajiboye was called to make a save again in the 76th minute as he got down well to stop a long range strike from going in.

Substitute Ibrahim Mustapha connected with a header off Okoro’s set piece but his effort went wide with just over 10 minutes left.

Sudan had two good chances in the 84th minute but were first denied by Ajiboye who made a one-handed save from close range before Okoro made a goal line clearance.

Sudan were reduced to 10 men in the 87th minute after Bakri Bachir was shown a straight red card for tripping Ojo who was goal-bound.

From the resultant free-kick, Okoro saw his well struck effort go inches off target.
Sudan almost drew level in the 91st minute but Ajiboye made a superb flying save tipping the ball over the bar for a corner.

From the corner, Sudan went close again but a Nigerian defender cleared off the line.
Posted by Unknown
Labels: Sports