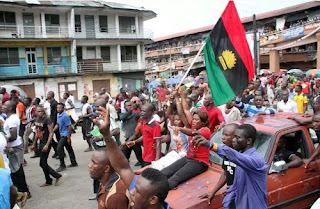 The Nnamdi Kanu-led IPOB, has alleged that the President Muhammadu Buhari-led Federal Government deployed Fulani soldiers to Benue State to protect herdsmen and not people of the state.

The Indigenous People of Biafra (IPOB), has decried the support of the leadership of Ohanaeze Ndigbo and South-East governors for the recent military Operation Python Dance that unleashed mayhem on a non violent organization that it is, as well as the entire South East and South South, saying Federal Government’s inaction to herdsmen attacks and killings in the Middle Belt, would have served as a lesson and an eye opener to its duplicity.

The group wondered why Ohanaeze and governors of Southeast endorsed the attack on IPOB by military armored tanks in the name of operation Python dance while no Hausa/Fulani governor or Arewa Consultative Forum has condemned or spoken out against the killer herdsmen.

The media and publicity secretary of IPOB, Emma Powerful, in a statement yesterday said that the deployment of soldiers to Benue, Taraba and other states to tame the menace of herdsmen by the federal government has been belated after much havoc had been done and many lives wasted in the areas.

According him, “Have you heard a single word of condemnation from any Hausa Fulani governor or Arewa Consultative Forum against these killer herdsmen? The answer is a capital no. Maybe there is a lesson here to be learned by Igbo politicians and Ohaneze Ndigbo.

“This government is currently in the midst of deceit but unfortunately some people are being taken in by their lies. It took pressure from all over the world to get this administration to agree to this paper deployment because we know it’s not real.

“The best remedy for the murderous mayhem of the terrorists is to divide Nigeria. Anybody still habouring the hope of one united prosperous Nigeria is living in a fool’s paradise. Unfortunately, this belatedly announced Operation Cat race or whatever they named it, to deal with a band of hardened state sponsored terrorists is totally meaningless. People will continue to die needlessly until Nigeria is divided.

“The deployment of troops to beleaguered Benue communities is a fraud designed to hoodwink the masses into thinking that this administration is serious about fighting the menace of Fulani herdsmen which they created through their policy of acquiescence and appeasement.

“These so called troops allegedly deployed to Benue are all staffed by Fulani officers who as usual will provide protection and cover for the tribesmen who are doing the killing. The world witnessed the same scenario in Southern Kaduna in 201617 or we have, suddenly forgotten. Did Nigerian Army not allegedly supply murderous herdsmen with arms with which they massacred and sacked non Muslim villages in Southern Kaduna?”

Despite the outlawed group’s strong words, the Ohanaeze Ndigbo, Southeast governors and other prominent leaders of the region have consistently expressed belief and support for a united Nigeria.
Posted by Unknown
Labels: News