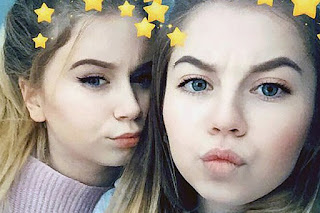 According to Daily Star UK, two half-sisters were found dead on a pavement after reportedly throwing themselves off a 10-storey building as part of a twisted ‘suicide game’.

Russian cops are investigating to see whether the tragic deaths are linked to the horrific so-called Blue Whale suicide “game”.

Anastasia Svestozarova, 15, and Maria Vinogradova, 12, were found dead in the west Russian town of Izhevsk.

Hundreds of children and teenagers across the country have killed themselves in recent years after being brainwashed online by sick mentors who order them to complete 50 steps.

The tasks vary, but all end in suicide.
Cops are now examining the girls’ phones and computers for traces they were exploited by vile sickos online.

Before she died, Maria posted a photo of her boyfriend and a message to him with smiles and hearts.

The text said: “Forgive me, please. I love you so much. I know you will find someone better than me.”

Anastasia recorded a message where she said: “Good bye to everyone.

“I love you all. This is true. Love you very very much.”

He added 19 “mentors” had been arrested so far.

Mentors typically pick up vulnerable and unhappy young people and give the tasks involving self-hate, and exhaustion.
Posted by Unknown
Labels: Gist