A+ A-
Print Email
Antoine Griezmann may have made a lot of Atletico Madrid fans happy when he opted to stay at the club beyond the January transfer window, but tensions between the striker and supporters reached a new level on Sunday.

The France international had yet again been the subject of speculation throughout another transfer period.

Reports in Spain suggested the 26-year-old had reached a secret agreement with Barcelona that would see him move to Camp Nou in the summer, but the Catalan side were forced to deny any such deal was in place.

But the attacker was met with whistles and jeers from the home side and did not take too kindly to the reaction.

Griezmann immediately looked up at the fans, kicked the ball away and remonstrated with those jeering him.

The former Real Sociedad star even held a finger up to his lips to tell the crowd to be quiet. 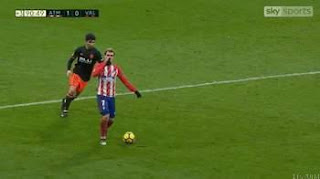