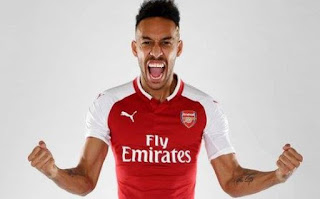 The London club, Arsenal bolstered their forward line by signing the Gabon international from Borussia Dortmund for a club-record fee on Wednesday but Aubameyang, 28, did not fully participate in Thursday's training session due to a fever.

"Aubameyang, I have to assess how well he is physically today and how well he feels," Wenger told a news conference.

"He had a fever so he could not practise a lot. He started yesterday, was still not completely well. I have to assess with the medical department how fit he can be."

Wenger revealed that he would take a late call on midfielder Jack Wilshere, who is also unwell.

"We hope he is capable of being in the squad, he is better. He will practice with the team today and we will see how he feels," Wenger added.

The manager said Armenia midfielder Henrikh Mkhitaryan, another of Arsenal's recruits in the January transfer window, is in line to start against ninth-placed Everton.

Wenger, however, kept his cards close to his chest when asked if the attacking quartet of Aubameyang, Mkhitaryan, Mesut Ozil and Alexandre Lacazette could play together on Saturday.

"It's always possible. Will I do it? Maybe, I don't know. But it is possible, yes," Wenger added.

"We can play two up (front) as well. One up or two up. You need at least two top strikers to play in the Premier League because if one gets injured you have a problem."

Arsenal are sixth in the table with 42 points from 25 games.
Posted by Unknown
Labels: Sports