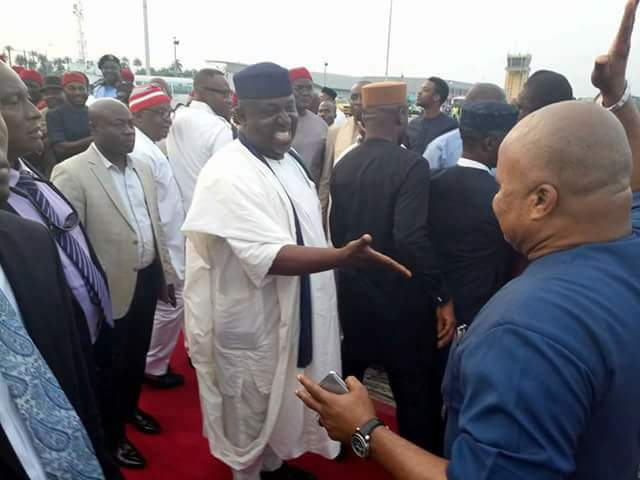 A press release issued today wednesday 28, February 2018 by Sam Onwuemeodo, the Chief Press Secretary to Imo State Governor, Rochas Okorocha and made available to Ifeanyicy.com, reads "It is unfortunate that while we have continued to exercise caution and demonstrate apparent decency and discipline in our media outings even as they concern some of the Politicians and governorship aspirants in the State, few of them have always thrown caution to the wind by thinking that the only way they can make impact or make a headway in their Politics and Political pursuits is by embarking on falsehood and sponsoring cheap blackmail against Governor Rochas Okorocha.

As a responsible government and as responsible people we do not trade on propaganda, falsehood and blackmail. We do not tell lies.

They have sponsored lies against the governor over the outcome of the APC NEC meeting held in Abuja on Tuesday, February 27, 2018 in which the tenure of the National Chairman Chief John Oyegun and others were extended.

The governor is the strongest pillar of APC in the South-East and one of the pillars in the Country. And he has remained supportive in all ramifications to the John Oyegun-led National Exco of the Party. And there is no reason anybody should begin to create the impression that Governor Okorocha was against the extension of Chief Oyegun’s tenure.

The APC governors who are all members of the APC Governors’ Forum which governor Okorocha heads supported the extension of tenure across the board. And with that, the governors are the greatest beneficiaries of the extension.

You may ask, where were these elements when the PDP foot soldiers were invading Imo and South-East in general with Soldiers and other Security agents. Rochas made the survival of APC in the South-East possible, having a Senator, three House of Representatives, Majority in the House of Assembly (23 out of 27), and gave President Muhammadu Buhari the highest number of votes in 2015 in the South-East. And APC won that election but the PDP people doctored the whole exercise with the help of Security agencies and INEC then. Time will expose these folks who think that their Political survival lies with blackmail against Okorocha.

But I want to say this for the sake of emphasis. Senator Ifeanyi Araraume cannot win the ticket of APC for the 2019 guber in the State and can never govern the State. So people should not allow themselves to be deceived.

Again, if he sees himself as a Political force, let him do what Rochas Okorocha did in 2011 by taking the ticket of APGA that was not on ground and won his election by defeating a sitting governor of PDP extraction and in 2015, when he defiled all the PDP onslaughts with federal might and joined the Merger that gave birth to APC at the risk of his life and his second term bid and also won his election. Let Senator Araraume pick the ticket of any of the Parties, contest and win and we will Celebrate him. He should not be always working to undo sitting governors to become governor.

Some of these people were among those calling Rochas, OkoroHausa, Alhaji in Government House and Buhari-Rochas and accusing them of coming to Islamize Igboland and Nigeria in general.

Name-dropping has also become old fashioned in Politics. In 2007 and 2011, it was Chief Tony Aninih’s name that was been dropped. Today, they have begun to drop the name of Chief John Oyegun. Powerful Politicians in the real sense of the word do not drop names." the Governor concludes.