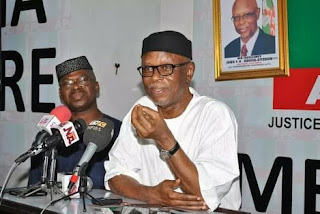 The All Progressives Congress has asked opposition parties to work with the party in actualizing its restructuring agenda.

The National Chairman of the ruling All Progressives Congress (APC), Chief John Odigie-Oyegun, has said the ruling party will accept help from other political parties and stakeholders in order to actualise the reform of the country’s federal structure.

Speaking at the formal presentation of the report of the party’s committee on true federalism yesterday in Abuja, Oyegun said it is only by such collaboration that the committee’s recommendations can be implemented.

He said if the report is fully implemented, it will help in making Nigeria better. Oyegun criticised past conferences as a mere flamboyant exercise that ended in nothing, saying what the APC was bringing on board were true opinions of Nigerians across board.

Speaking yesterday in Abuja during the public presentation of the reports as submitted by the Governor of Kaduna State, Nasir el-Rufai-led committee on true federalism, the APC national chairman said Nigeria current system of government is ‘more of unitary system of government.’

“We have held flamboyant conferences on the structures of the constitution of this country but each time it always ended up in nothing. Today, we are moving from set-piece confrences to the beginning of a new Nigeria.

“Today you are going to be partners in the construction of the basic fundamental foundation that truly wed this county together. There is no question at all that where we were and where we are now is basically a bastardised kind of federal structure, more like a unitary system but what we are going to present to the nation today are the considered views of the critical mass of this institution.

“Those who are strong in expressing their views, those who are not so strong, the women and the youths of this nation who participated strongly and intensively in the result that are being presented to you today.

“When last year the issue of restructuring burst into the public domain. The main reason being one more issue to reverse President Muhammadu Buhari administration at that point, this country was facing major issue that needed to be trashed out, we are faced with crisis of economy and a collapsed crude market and we were to find a new reality under President Buhari, base on what we can produce,” he said.

Also speaking, Chairman of the committee El-Rufai, who was represented by his Special Adviser on Politics, Uba Sani, said his committee has produced clear recommendations and draft bills that incorporate amendments to strengthen federalism.

“Thus far, we have not heard rebuttals of the recommendations. Rather, there has been a lot of hysteria triggered by seeming disbelief that a party in power at the centre is proposing true federalism. In place of a counter-narrative or alternative position on true federalism, what we hear is that the recommendations are coming too close to the elections. If something is desirable, surely the imminence of elections should not render it unappealing.

“The reality is that restructuring is a nation-building opportunity. There is now no significant constituency against the idea that states should exercise consequential powers, assume more responsibilities and control resources. It is time to make it work, for the benefit of the people of this country.

“It is difficult to escape the suspicion that for some people this is a moment of peril. They appear to fear that the possibility of restructuring being actualised will remove the basis of their political viability. We assure them that they always find new causes, like working with others to implement the recommendations.”

Reacting to the APC restructuring report, the Peoples Democratic Party (PDP) urged Nigerians to be careful as the restructuring plan by APC is another ploy to deceive Nigerians with another round of lies, empty proposals and hollow promises, ahead of 2019 elections, just as it did in 2015.

The party also said the report is another calculated ploy by the failed Buhari-led government to divert public attention from the woes of a worsening economy, unrelenting killings, corruption and the endless litany of afflictions occasioned by their almost three years of dysfunctional governance.

PDP National Publicity Secretary, Kola Ologbondiyan, in a statement yesterday, said it amounts to outright depravity that the same APC leaders who at assumption of office, rejected restructuring will now suddenly turn around to pose as fathers of a restructured Nigeria simply because the 2019 general elections beckon.

PDP said it was instructive to note that the APC refused to rally its members in the National Assembly to support or vote for any amendment that dwelts on restructuring when the federal legislature voted on sections of the constitution where amendments have been proposed in the direction of restructuring.

“If anything, APC leaders have consistently criticised any amendment that spoke or have a semblance of restructuring or true federalism.

“It is therefore deceptive that in the wake of their rejection by the people, the discredited APC and its dysfunctional government have suddenly woken up to parade as champions of a restructured Nigeria. This is a callous and wicked attempt to once again take Nigerians on a trip to the land of fantasy.

The PDP said the fact that the APC has no littlest intention of implementing any form of restructuring is completely manifest in the attitude and body language of its leaders including President Buhari, who in his 2018 new year address, rejected the idea of restructuring, by declaring that “When all the aggregates of nationwide opinions are considered, my firm view is that our problems are more to do with process than structure.”

“Even el-Rufai, who eventually became the Chairman of the APC panel on restructuring, had also on June 29, 2017, during an interview on Channels TV, denied that the APC promised restructuring and described Nigerians, who were taking his party to task on the issue, as ‘political opportunists and irresponsible’ people.”

The party added: “This is in addition to declaration by the Minister of Information, Alhaji Lai Mohammed, who in a Radio Nigeria (FRCN) interview programme on June 9, 2017, stated that restructuring is not President Buhari’s priority.

“From Borno State Governor, Kashim Shettima, who was quoted to have said “to hell with restructuring,” to the totality of APC leaders, none believes in either true federalism or restructuring by any name called.

“We therefore urge Nigerians to reject the new ploy by the APC to deceive them for their votes in 2019,” it said
Posted by Unknown
Labels: Politics