A Lagos Apprentice Barber Caught For Robbery, Sentenced To 42 Years In Jail (Photo) 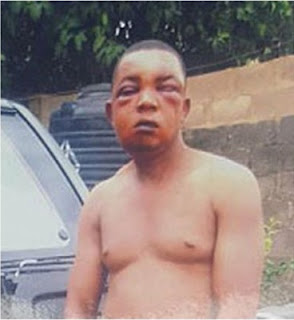 A Lagos High Court in Igbosere has sentenced an apprentice barber, Samuel Edet, to 42 years in prison for robbery, according to The Nation.

She sentenced him to 21 years imprisonment for conspiracy to commit robbery and another 21 years for robbery.

The sentences, which were without an option of a fine, will run concurrently, meaning Edet will spend only 21 years in jail.

Edet, from Akwa Ibom State, was arraigned on April 27, 2015, on a two-count charge of conspiracy to commit robbery and robbery.
Prosecuting counsel Haroun Adebayo said the offences contravened sections 297 and 295(1) of the Criminal Law of Lagos State, 2011.

During a nearly three-year trial, Elelo testified that the incident occurred on June 15, 2012 between 10 and 11pm.

Elelo said: “I was returning from a C & S Church after a revival when, at St. Paul Street, along Agbado Road, leaving Toyin Bus Stop, the second street by the left, I saw a black Jeep waiting ahead of me. I drove towards it slowly and the car flashed its full headlights at me. I became afraid.

“He (Edet) alighted from the Jeep and accosted me, asking me to alight and demanded for my key. He asked me to get into the boot of my vehicle, but I ran away and pressed the remote control of my vehicle that was in my pocket.

“I got to a police check point at Toyin Bus Stop and alerted the police that I had been robbed. The policemen and passers-by came to my rescue and found the defendant in the car because the remote control had made the car immovable.”

According to Elelo, Edet’s accomplices zoomed off as soon as the crowd arrived.
But Edet denied the allegations. He described himself as the victim of police illegal arrest.

Edet said: “I live at Ajegunle and work as an apprentice barber. I was on my way to look for a shop or work when at Ojuelegba Bus Stop I saw people running and shouting ‘Ole’ ‘Ole’ meaning thief, thief and I was arrested and taken to the Special Anti-Robbery Squad (SARS), where the police wrote something on paper and asked me to sign.”

According to Edet, he was threatened that if he refused to sign he would be shot; hence, be signed.

But Justice Ogunsanya held that Elelo’s testimony, as well as that of the other eyewitnesses were credible.

She observed that there were several inconsistencies in Edet’s testimony, including his statement that he was looking for a shop or work at about 10:30pm on the night of the robbery.

The judge said: “The court believes the witnesses’ evidence that it is the defendant that stole the car. The victim positively identified the defendant as the person who robbed him.”

The court also noted that in Edet’s written statement to the police, he confessed to the crime, and that the confessional statement was not challenged by his counsel when it was tendered in court by the prosecution.

Justice Ogunsanya said: “The court is satisfied that the defendant is as guilty as charged.”
Posted by Unknown
Labels: News