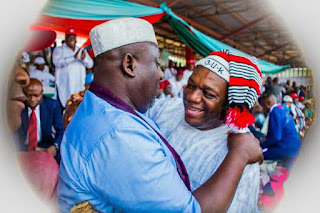 Imo state governor, Rochas Okorocha​, has urged the Igbo to avoid playing what he described as “primitive, regional and clanish politics”​.

He warned that such attitude would do them no good.

Okorocha spoke on Tuesday at the Umuahia Township Stadium during a mega rally organized to welcome defectors from other parties​​ to the All Progressives Congress (APC).​

Okorocha, who said that Ndigbo played “bad politics” in 2015, advised them to go for national politics.

In his speech, former Abia governor, Orji Kalu promised “to put everything I have to bring Abia to APC”​.

He noted that the state needed “to be liberated from bondage.”

Kalu said although the party recorded less than six per cent votes in 2015 in Abia, he would work hard to beef up the figure to 75 per cent in 2019.

He added that the party would deploy “federal might” to resist thuggery and any attempt to rig APC out during the 2019 polls.
Posted by Unknown
Labels: News