UN appoints Nigerian as special investigator for killing of Burundians 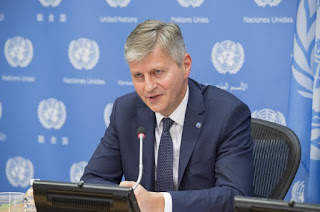 The UN Under-Secretary-General for Peacekeeping Operations, Jean-Pierre Lacroix, has appointed a retired Nigerian lieutenant general, Chikadibia Obiakor, to lead a special investigation into the killing of some Burundian refugees in the Democratic Republic of the Congo (DRC).

Stephane Dujarric, spokesman for the UN Secretary-General in New York, announced this in a statement issued in New York.

No fewer than 35 Burundian refugees were killed and more than 100 others wounded by security forces in eastern DRC September 15, 2017 at Kamanyola, South Kivu.

The special investigation will look into the challenges facing the UN Organisation Stabilisation Mission in the DRC (MONUSCO) in discharging its mandate to protect civilians and provide recommendations on improving the performance of its troops.

Mr. Obiakor has had a long and distinguished career in the Nigerian Army and was the Force Commander of the UN Mission in Liberia from 2006 to 2008.

He also served as Military Adviser for Peacekeeping Operations at UN Headquarters in New York from 2008 to 2010.

The refugees were killed in Kamanyola area in South Kivu province’s Walungu territory after they allegedly rioted and the Congolese army made an attempt to control the situation.

Reports said no fewer than 18 Burundian refugees were killed on the spot and the others died the following day from the wounds they sustained.

The refugees were protesting against the decision of DRC officials to extradite two other refugees arrested for allegedly making weapons.

There are over 400,000 Burundian refugees in DRC who fled after violence erupted in their country in April 2015 when incumbent President Pierre Nkurunziza refused to leave power after serving two terms and stood in elections for a third term.

The opposition in Burundi had gone on a rampage, attacking police and army while also killing supporters of Nkurunziza.

Thousands of Burundian refugees had fled to neighbouring countries, including DRC, Tanzania, Rwanda and Uganda.

Out of 40,000 Burundian asylum-seekers, 28,000 who fled hostilities in their country were identified by the DRC’s National Commission for Refugees in Kamanyola.
(NAN)
Posted by Unknown
Labels: News