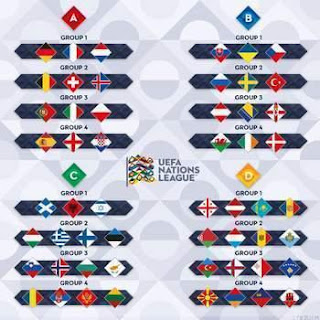 England will meet Croatia, who famously denied them a place at Euro 2008 with a 3-2 win at Wembley in November 2007, and Julen Lopetegui's Spain in the inaugural UEFA Nations League.

France, Netherlands and Germany, meanwhile, have been drawn in a daunting group.

League B will see the Republic of Ireland meet Wales, now coached by Ryan Giggs, and Denmark, who beat the Irish in the play-off for the 2018 World Cup finals.

There is also League C and League D with four groups on each.

The system will also offer an alternative route into the European Championship, beginning with Euro 2020.

Teams who finish top of their groups in League A will compete at the Nations League finals next year, while countries can also be promoted and relegated to the different leagues depending on the final standings.

The matches begin in September 2018.