Transfer news: De Bruyne reveals why he has no feeling to exit Manchester City 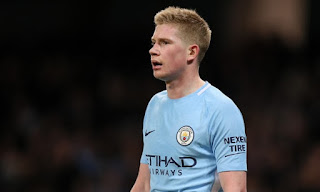 Manchester City star, Kevin De Bruyne says he will be signing a new contract at the club.

The Belgian International said that he has “no feeling to go anywhere else”.

The 26-year-old suggested that he will be committing to the Premier League leaders as he is feeling settled at the Etihad Stadium.

“I made the right decision in coming to City and my family feels the same, so everything is good,” De Bruyne told Daily Star.

“The team is going in the right direction and that is also important.

“I always say in football that a lot of things can happen very quickly but I’m very happy here and the people at the club know that.

“I’ve no feeling to go anywhere else and I enjoy being part of the project here and playing the kind of football, we are playing,” he said.

De Bruyne joined City from Chelsea for £55 million in the summer of 2015.
Posted by Unknown
Labels: Sports