Wizkid Currently recording a new album in Lagos for 2018 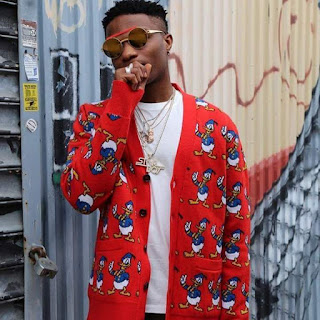 Wizkid has revealed that he is recording a new album in Lagos.

The singer who has been in Nigeria since December 2017, has shared some of his plans for 2018, and at the heart of it is a new album.

A fan had inquired of his plans for 2018, as ‘what can we expect from the real Starboy this year?” To which Wizkid responded with, “Well, I’m recording a new album in Lagos, Nigeria…and…eeehhh…we’ll see.”

Sounds From The Other Side

In 2017, Wizkid dropped his third studio album “Sounds From The Other Side”. The highly promoted global release from Nigerian singer/songwriter Wizkid was made available via Starboy/RCA Records/Sony Music International. The project features collaborations with Drake, Major Lazer, Chris Brown, Ty Dolla $ign, Trey Songz and Bucie , along with production by Sarz, Diplo, Picard Brothers, Spellz, DJ Mustard and more.

It received favourable reviews from critics around he world.
Posted by Unknown
Labels: CelebrityGist