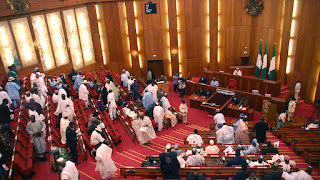 The Council for the Regulation of Engineering in Nigeria (COREN) has raised alarm over bridges being constructed by the Okorocha led Imo State Government.

COREN lamented that they were disasters waiting to happen, as the projects were being executed without engineering designs.

COREN President, Kashim Ali, said this on Tuesday during a courtesy visit to the Senate.

“Tragedy is about to happen in Imo State. Bridges are being built in Imo without design, it is a disaster waiting to happen,” he said.

Ali appealed to the lawmakers to urgently pass an amendment to the establishment Act of COREN, to empower the council to issue and enforce a stop work order on infrastructure that are being constructed without approved designs.

He added that registered members of the council have been known to abide by regulations, and have therefore not been involved in cases of construction collapse.

Mark, in his response, wondered that any construction work would be carried out without designs.

“Somebody is building bridges without designs. This is very unfortunate.

“I wish COREN has the authority to stop it because the consequence of this will be much. We shouldn’t wait until when things go wrong,” Mark said.

He gave the assurance that the Senate would support any amendments that would assist in safety of lives.
Posted by Unknown
Labels: News