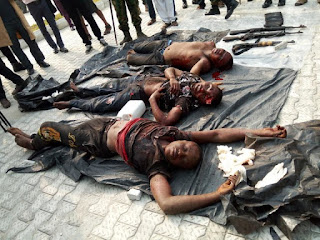 A notorious cultist and kidnapper Mr. Igwedibia Johnson, aka Don Waney, who has been on the run since he masterminded the New Year’s Day killing of 17 worshipers after crossover service in Omoku, the headquarters of Ogba/Egbema/Ndoni LGA of Rivers State, has been killed.

He was reported killed by soldiers and operatives of the Department of State Services (DSS), along with two of his lieutenants: Ikechukwu Adiele and Lucky Ode.

The body of Johnson, Adiele and Ode were on Sunday morning displayed at the 6 Division of the Nigerian Army, Port Harcourt, by the outgoing General Officer Commanding (GOC) of the division, Maj.-Gen. Enobong Udoh, who was accompanied by Rivers Director of DSS, Mr. Tosin Ajayi, and Rivers Commissioner of Police, Zaki Ahmed.

Udoh said: Intense surveillance activities on him (Johnson) and his gang by the DSS, Rivers State Command, revealed that after committing the atrocities, he relocated to a neighbourhood within Enugu Town in Enugu State, where he rented an apartment and started living among unsuspecting neighbours within the community.

“From the relative safety of his newly-rented apartment, Don Waney was already perfecting plans to wrought another mayhem in Omoku, in which he was to attack churches, schools, army and police locations and the residences of the generality of the already-traumatised people of Omoku.

“Incidentally, on sensing that the combine team were closing in on his residence, Don Waney, his Second-in-Command (Ikechukwu Adiele) and another gang member (Lucky Ode) attempted to escape through the back exit of the apartment and were shot down by the eagle-eyed troops in the process. One of them died on the spot, while the other two, who sustained gunshot wounds, eventually died, while being evacuated for medical attention.

“The remains of Don Waney and his cohorts were brought back to Port Harcourt by the combine team and handed over to the Rivers State Police Command, for further action.”

While also speaking, Rivers police commissioner assured residents of the state of the safety of their lives and property, declaring that other members of Johnson’s gang and other criminals in Rivers would be arrested and prosecuted, to serve as a deterrent to other criminal-minded persons.
Posted by Unknown
Labels: Crime