Residents Of Benue Protest At National Assembly Over Killings 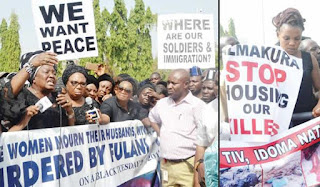 Benue State Indigenes on Thursday stormed the National Assembly Complex in Abuja to protest against the killings of their people by herdsmen.

The protesters, who were made up of Igede, Tiv, Idoma and other ethnic groups in Benue, got to the gate at about 10am. They were said to have moved from Makurdi, the state capital, to the Federal Capital Territory in the morning for the protest.

They first assembled at the Unity Fountain, from where they proceeded to the National Assembly and other parts of the nation’s capital.

Security personnel manning the gate prevented them from gaining entrance into the premises.

They had on their placards inscriptions that read, ‘Atomic weapons in Benue,’ ‘Where are the soldiers,?’ ‘Wake up,!’ ‘Where is UN,?’ ‘We want peace,’ ‘Genocide in Benue,’ ‘Tiv women mourn their husbands, wives, daughters and sons murdered by Fulani terrorists on Tuesday 2/1/2018’ and ‘No land or cattle colony in Benue.’

Leading the protest, a former member of the Benue State House of Assembly and ex-commissioner in the state, Mrs. Rebecca Apezan, alleged that President Muhammadu Buhari had abandoned the Benue people, while condoning criminal activities by the herdsmen.
Posted by Unknown
Labels: News