Remi Tinubu: Is Lagos Ready For A Female Governor? 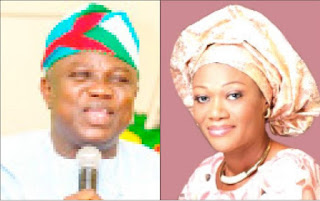 When rumours were rife in 2014 that Senator Remi Tinubu,wife of Asiwaju Bola Tinubu, former governor of Lagos state and national leader of the ruling All Progressives Congress (APC) was plotting to succeed then governor Babatunde Raji Fashola (SAN) in 2015, the senator, who is currently representing Lagos Central senatorial district quickly dispelled the rumour thereby putting an end to the tension that was already building up in the party then.

Speaking at a press briefing, Oluremi who denied ever nursing an ambition to govern the state said governing Lagos State was not for the “tender-hearted”.

She said, “Truly, it is never my ambition to run for the governor of Lagos State. My husband did it for eight years and I was not an outsider to it. It is not a job for the tender hearted. It is a lot of work to govern Lagos. I don’t think I have the strength to govern the present state of Lagos.

“There is still a lot of work to be done for Lagos; it’s not a child’s play. I don’t have such ambition. Maybe, I can be the Vice-President, not the governor.”

Asiwaju Tinubu on his part threw his weight behind Akinwunmi Ambode, a former Accountant – General who retired after 27 years in the state’s civil service.

Ambode won the APC primary to clinch the party’s ticket. He then won the governorship election defeating Jimi Agbaje, the flagbearer of the Peoples Democratic Party.

With the 2019 election around the corner, proponents of ‘Remi Tinubu for Lagos State Governor’ are back again. In recent times, posters of the senator are already circulating like wild fire on social media while many of her supporters are claiming that her governorship aspiration is already a done deal.

However, contrary to 2014 when the senator publicly distanced herself from the alleged governorship bid, this time she has maintained a dignified silence which has further emboldened her supporters and is already causing a disquiet within the party.

Many political leaders and followers in Lagos State, especially leaders of the APC in Lagos Central Senatorial District, the zone Senator Oluremi represents in the Senate, are aware of her decision not to seek re-election into the senate after the expiration of her tenure in 2019.

It’s not a hidden fact that Senator Remi Tinubu has informed many of the leaders that she is not seeking a re-election for third term in the Senate.

While many believe the senator has a constitutional right to aspire for the highest political office in Lagos, they are however worried given the timing owing to the performance of Governor Ambode and a likelihood that he may he want to seek another term in office.

So far, Ambode’s sterling performance especially in the areas of infrastructural developments and security has earned him accolades both within and outside and outside the state. Though he has not publicly come out to say he will seek reelection, many APC supporters including state and federal lawmakers in separate interviews said his second term is non- negotiable.

While Senator Oluremi cannot be reached for comments, one of her aides who claimed to be her Constituency Manager said he is not aware of her governorship ambition at the moment.

“Honestly, I am just hearing it from you that she is nursing a governorship ambition. I am not aware of that at the moment” he said.

As expected, many of the APC supporters INDEPENDENT sought audience with refused to comment on the issue since according to them “the matter is still shrouded in secrecy”.

However, speaking with our correspondent, a member of the party, Lateef Balogun said while he is aware of the posters of Senator Oluremi Tinubu online, he will however wait for her to make official pronouncement on the issue before reacting.

He said “ I have seen the posters online but I think we should wait for the senator to speak on whether she is contesting as governor or not before arriving at judgments. But if indeed she is contesting in 2019, I think the timing is wrong and I don’t think even her husband (Asiwaju) will support her”.

“I must however add that there is no smoke without fire. Some people are already speculating that maybe Governor Ambode had a one-term agreement with Asiwaju.

You know that we are just foot soldiers so we may not be aware of high-powered agreements and negotiations that go on in corridors of power. But feelers I am getting, Governor Ambode will seek reelection and I will support his bid” he said.

Another APC chieftain who spoke on condition of anonymity said “What is wrong in Senator Oluremi wanting to become governor in 2019? I am a member of the Mandate group and I will align myself with Asiwaju’s position. I don’t know Ambode in 2014 when Asiwaju brought him as his candidate and we worked for his victory. If now he says it is his wife, so be it”.

Akin Dada, a public affairs analyst however said the Tinubus should take into consideration the mood of Lagosians before embarking on the venture.

“I agree with those who said she has constitutional right to vie for any position but the questions we should ask is, ‘Are the electorates in Lagos ready for a female governor? ‘If yes, is it Oluremi Tinubu?

‘Given her performance in the Senate in the last six years which to me is below par, does she possess the needed requisite to administer a multifarious state like Lagos?”

In an interview with INDEPENDENT, Hon. Rotimi Agunsoye, representing Kosofe Federal Constituency said he is confident that Governor Ambode will be reelected for another term.

“I am confident that apart from securing his second term, people of virtues will tell us at the national assembly that ‘please, include it in the constitution that people like Governor Akinwunmi Ambode can come for third term’.
Posted by Unknown
Labels: Politics