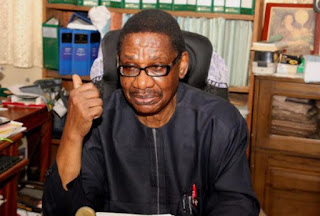 He described the critics as Lilliputians, saying they were idle minds complaining over nothing.

Sagay said the outrage amounts to making a mountain out of a molehill.

To him, the Presidency could not be genuinely faulted in the circumstance.

The professor of law said he was even angry with the Presidency for appearing to be apologetic over the development.

Sagay told our correspondent: “What I find irritating is the so-called outrage by the Nigerian elite that in a list of almost 3,000 people nominated for various agencies, five or six had died.

“And there is a general pretence by the Nigerian elite that it was of huge, monumental importance; that it shows incompetence and all that.

“I ask myself: a list that has been under compilation for over two years, revised and re-revised, do they expect that about 3,000 people would all still be alive after two years?

“If not, do they expect the Presidency to go knocking from door to door 24 hours before the announcement to ask who was dead or alive, or to ask if they would survive until the announcement? Are they supposed to have done that?

“So, the whole thing (criticisms) is extremely unreasonable.”

Sagay said the critics reminded him of Lilliput and Blefuscu, fictional island nations that appear in the first part of the 1726 novel, Gulliver’s Travel,by Jonathan Swift.

“In the book, the nations are inhabited by tiny people who are about one-twelfth the height of ordinary humans. They went to war. What did they go to war for?

“This gives the impression that the Nigerian elite are filled with Lilliputians, who quarrel over nothing and ignore major issues of importance. And I call this collective stupidity and idleness of the mind,” Sagay said.

“And I am very annoyed with the Presidency for looking apologetic over it. As I said, we’re talking about 3,000 people.

“At what stage should they be checking? Can they verify 3,000 names in 24 hours? Suppose they do it one week before announcement and someone died in-between? Is it their fault too?

“So, since nobody can guarantee life, out of 3,000 within two years, there is nothing unreasonable about that.

“Those vacancies will be filled, and Nigerians should stop quarrelling over nothing and start taking on more important things. They should not behave like idle minds.”

The Peoples Democratic Party (PDP), the Arewa Consultative Forum (ACF), former Education Minister Dr Oby Ezekwesili, the lawmaker representing Kaduna Central Senatorial District, Senator Shehu Sani, and the President of the Campaign for Democracy (CD), Usman Abdul, are among those who criticised President Buhari and the APC for including names of dead men on the boards’ list.

ACF’s National Publicity Secretary Alhaji Muhammad Biu said: “The recent appointments of persons into various boards of parastatals and agencies of the Federal Government by the Presidency, where names of dead persons appeared on the list as published by the media clearly shows that due diligence was not employed.

“The ACF, therefore, calls for proper screening of persons being considered for appointment into various departments and agencies of government in order to avoid such embarrassing incident.”

Dr. Ezekwesili, in a series of tweets, said she was disappointed by the Presidency.

“Some ‘mistakes’ are simply indefensible. Who is that defending that a significant # (2, 3 or 4? Which? ) of dead people are on an appointment list of the FG .@AsoRock that the President, @MBuhari signed off on? Haba. This is the height of what Feyi calls, “anyhowness.” #Tragic,” she stated.

“Nigerians can now see why the nation’s economy has been in shambles in the last two years. When we say that this government is completely inept, some Nigerians did not know to which level, but now they do.

“This inability to tidy up a simple issue of list of 209 appointees has completely exposed the extent the APC government is bereft of simple organisational skills to manage a country like Nigeria, which is in dire need of development,” PDP said.
Posted by Unknown
Labels: Politics