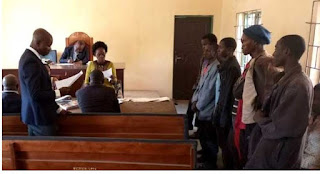 Six herdsmen have, Friday, been arraigned before Magistrate, Isaac Ajim at the Chief Magistrate Court 1 sitting in Makurdi by the Benue State Police for their alleged involvement in the killing of 19 farmers in Akor village of Guma Local Government Area of Benue State.

Recall that over 20 persons, including a pregnant woman were butchered on January 2, 2018, in a fresh attack carried out by the herdsmen.

Governor Samuel Ortom of Benue state had equally confirmed the killings, while condemning it.

Many Nigerians had and still condemns the killings and have called on the security agencies to bring the culprits to book.

President Muhammadu Buhari had, yesterday, while condemning the attack, ordered that the culprits be fished out and brought to book.
Posted by Unknown
Labels: Crime