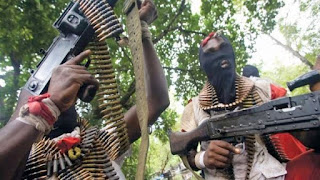 Information reaching us from Makurdi, the Benue State capital says gunmen have taken grip of the mourning state right now as the area is under intense attack.

This is coming barely 48 hours after the bodies of 73 locals slain by Fulani herdsmen were given mass burial at the state capital.

An eyewitness told our Correspondent that gunshots have been reigning the Wadata area of Makurdi since 9.50am this morning, causing pandemonium.

Though our source did not disclose whether Fulani herdsmen were responsible, but it was gathered that at least one life has been lost in the sporadic shooting while many scamper for their lives.

“Even the popular Wadata market has been closed down as market women scamper for their lives”, the source said.

Our Correspondent could not establish valid communication with the Spokesman of the Nigerian Police in Benue Command due to epileptic reception of network.

As at the time of filing this report, (11.05), our source said the gunshots still reign the air and has not been brought under control.
Posted by Unknown
Labels: News