Philippe Coutinho will become Barcelona’s most expensive signing after a deal worth €160 million was agreed with Liverpool, which is the new British transfer record.

La Liga’s leaders will part with €120m as a guaranteed base fee, with another €40m in performance and appearance-related add-ons that are expected to be triggered.

The 25-year-old will move ahead of Ousmane Dembele as Barca’s highest-cost recruit, also surpassing Paul Pogba as the biggest player trade involving an English club.

Liverpool failed in their exhaustive efforts to convince Coutinho, who did not travel with the squad to a warm-weather camp in Dubai , to remain on Merseyside until the end of the season at the very least.

He is now the third most expensive footballer in the world, behind Paris Saint-Germain pair Neymar and Kylian Mbappe. 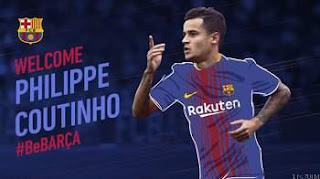