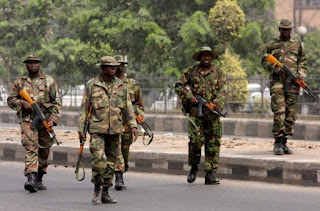 The 2 Brigade Nigeria Army says its troops raided cultists hideout, killing its leader, Akaninyene Jumbo, on January 15, after trailing him to the border between Akwa Ibom and Abia.

The army said this in a statement issued to journalists in Uyo on Tuesday by the Brigade Assistant Director of Information, Umar Shuaib.

“The culprit was known for terrorising the inhabitants of Ukanafun Local government Area in Akwa Ibom State.

“He perpetrated the killings of two Nigerian Police personnel and a Truck driver in Ukanafun local government area on 17 November last year.

“Also masterminded the killing of a commissioner’s sister and two others in Ikot Oko Osun community in Ukunafun local government area on 19 November 2017,’’ the statement read in part.

It said that the suspects had been evading arrests after all the incidents.

The statement added that after the first operation, the gallant troops following another tipoff invaded the hideout of the remaining gang members at Ikpe village in Eton Ekpo Local Government Area on January 16.

According to the statement, the two are said to be second in command to the kingpin.

The statement further said that some of the remnants of the cultists escaped with gunshot wounds.

It added that their corpses had been deposited at the University of Uyo Teaching Hospital mortuary.

The statement said that the Commander, 2 Brigade Nigerian Army, Abdu Hassan, has assured law abiding citizens in the area that the Brigade will do everything within its powers to protect their lives and property.

The statement solicited the support and cooperation of the public by reporting any form of crime to appropriate security agencies.