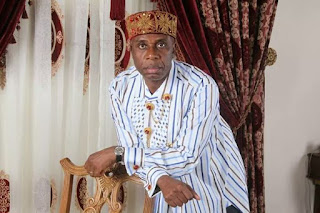 Rivers State Chapter of the All Progressives Congress, APC, has described Rotimi Amaechi, Minister of Transportation and former Governor of the state as the Niger Delta’s version of foremost nationalists, Obafemi Awolowo, Nnamdi Azikiwe, Tafawa Balewa and Ahmadu Bello.

The state arm of the party made the remark while reacting to the unprecedented and monumental gathering of traditional rulers, political leaders, sons and daughters of Ikwerre extraction in Rivers State at Isiokpo, the traditional Headquarters of the Ikwerre Ethnic Nationality to honour Amaechi.

A statement signed by Chief Chukwuemeka Eze, the Senior Special Assistant on Media and Public Affairs to Chairman of APC in the state, Ibiamu Davies Ikanya described the event as “epochal and monumental.”

The statement noted that the event was organised by the Ikwerre Youth Movement (IYM), the foremost socio-cultural organisation in Ikwerre land to “solemnize the Chieftaincy title earlier conferred on Chief Amaechi by the Ikwerre Traditional Rulers as “EZE OCHI ALIRI 1 of IKWERRE Land”, which means the person who stands tall to take on and ward off any challenge in a family or Community.

“Briefly, he is the “Redeemer of His people” (Ikwerre) or ‘The wise Defender of the Ikwerre kingdom’.

“The event unprecedented in recent time in the annals of social and political gathering in Rivers State commenced with 21 traditional gun shots to welcome Amaechi and over a million of persons from Ikwerre the largest ethnic group in Rivers State with friends and supporters to accord honour to this great son of Nigeria and to thank President
Muhammadu Buhari for the honour done to their son and Leader of Rivers State politics”, he said.

The Organisers through the President General of Ikwerre Youths Movement (IYM) and one of the greatest grass-root Mobilisers from Rivers State, Hon. Azubuike Chikere Wanjoku expressed their “profound gratitude to President Buhari for assisting their son to demonstrate to the entire world the stuff he is made up with as a great leader in
the mould of Zik Awo, Sir Abubakar Tafawa Balewa and Sir Ahmadu Bello. In short, Amaechi is our own Zik, Awo, Balawa and Saraduna combined.”

The state arm of the party further described Amaechi as a “breaker of records stating that the Holy Bible as reflected in the gospel of Mark 6:4,” said, “A prophet is honoured everywhere except in his own hometown and among his relatives and his own family” (New Living Translation) but Amaechi with the event of today have dusted this truism with the millions of Ikwerre sons and daughters his brethren agreeing as one people to honour him for his sterling and outstanding inputs towards the emancipation of the Ikwerre people and for becoming a great Iroko and one of the pillars through which the politics of Nigeria currently rotates.

“With this title and recognition Amaechi becomes the most influential Ikwerre man on planet earth.”

The party further stated that the Minister stood out as the only Nigerian that was a “Speaker of a State House of Assembly for eight years, Chairman of the Speakers’ Forum of Nigeria, Governor of Rivers State for eight years and two term Chairman of the Nigeria Governors Forum and most historically led an opposition political party to unseat a sitting President in Nigeria.”

The party explained that, “today, Chief Amaechi is not only changing the face of Transportation in Nigeria as the Minister of Transportation but stands out as one of the key and influential member of President Buhari’ s political Team.

“Not minding that the incumbent Governor of Rivers State, Chief Nyesom Ezebunwo Wike is of the Ikwerre extraction but the Ikwerre people in the event pleaded with the Eze Ochi Aliri 1 of Ikwerre to “please, introduce the APC candidate for the 2019 gubernatorial election and 2019 shall be a walk over as Wike has proved what it means not to be a
Governor”.

“To the Ikwerre Youth Movement, “Amaechi is our liberator. He is the man who broke the shackles of political timidity and wrenched the chains of economic naivety in our domain. This colossus of a man brought political freedom to our very doorsteps and we will henceforth stand by him in all his political calculations.”
Posted by Unknown
Labels: News