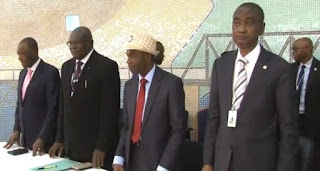 The Nigerian Bar Association (NBA) has asked the Federal Government to administer justice to victims of herdsmen attacks and convey the sense of equity to restore confidence among the people.

President of the Bar Association, Mr Abubakar Mahmoud who is on a fact-finding mission made the call during an investigative session with governor Samuel Ortom, shortly before the Makurdi town hall meeting.

While the governor hints on the herdsmen agenda of territorial occupation, a body of Benue state professionals at a briefing on the sides of the meeting say, over 1800 persons have been killed by the herdsmen.

In educating the Bar, governor Ortom explained the origin of the Open Grazing Prohibition Law and the territorial occupation agenda of the herdsmen.

The governor added that over 1800 farmers have been killed in six years
Participants at the event, therefore, called on the NBA to urge the Federal Government to put an end to the attacks.