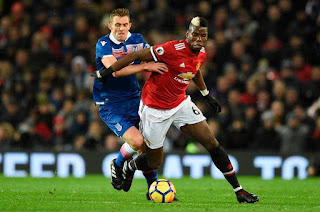 Manchester United manager, Jose Mourinho, has hailed Paul Pogba after their 3-0 win over Stoke City and says his team’s profile could change to suit the midfielder.

Pogba set up two goals as United reduced the gap between them and Manchester City to 12 points on Monday.

It took his tally for this season to nine assists and three goals in 13 league games.
“He was moving the ball fantastically well, with long passes changing the direction and creating problems for the opponent.

“He had an assist and if he had scored the free-kick with the last shot of the game, it would be really a reward for him.

“I think he is happy with the way the team is playing and he’s happy because the team is changing the profile and the profile is going more in his direction,” Mourinho said afterwards.
Posted by Unknown
Labels: Sports